November 27, 2011
What a weekend! I went home in a snowstorm on Wednesday. Dad and I hunted Thursday morning and with the fresh snow, we could see that the deer were right where we were. It was a little discouraging to have that confirmed for us, because we still had not seen a buck. We walked, tracked and walked some more. A cool thing that I had never seen before were deer beds. 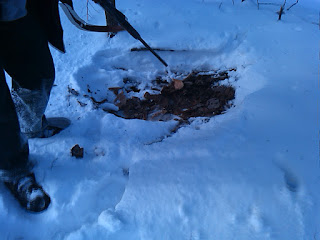 We saw 3 in a row and you can tell how big the deer is because they leave a print in the bed when they get up. This one was the largest and Dad is pointing to the print. We called it a day mid-morning and spent the rest of the day with family.

The next day was warm, 37 degrees. Which is warm for the end of November. Dad made the call that, because the majority of the tracts were headed to my tree seat, we headed down there first instead of sitting in the sky condo. We headed down and I was sitting and ready by 6am. I sat and waited.
It was around 8am that I saw him. He stepped out in front of me. Right in my shooting lane. Right where the second tree is. I could see his antlers up over his ears, but I could not see how big they were beyond that. 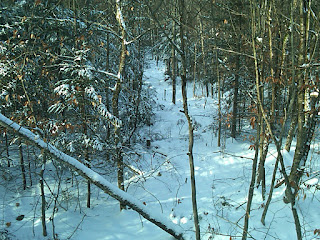 He had his head down. I shifted to try and get my gun in position (I keep it across my body, resting on the bar of my seat). As I moved, he stopped and lifted his head and looked right at me. I froze. I think I stopped breathing too. I did not want to spook him or make him run. And, I had no idea where Dad was. He was walking around somewhere, so I couldnt bank on Dad getting the buck if I didnt. The deer put his head back down again. moved again. He stopped, then lowered his head, flicked his tail and kept walking... right into the trees. I was freaking out. How could I tell Dad that I let a good sized buck walk in front of me and I didnt take a shot. I had a bleet in my jacket and as I was reaching for it, I saw him move in the bushes (far left on photo). I put the bleet back, made sure my orange mittens were out of the way so I could see out of my scope and waited. 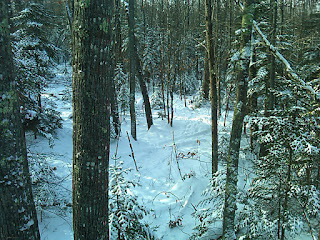 My heart was beating out of my chest. I got in position and set my scope on the opening where I prayed he stepped out of. It is right behind the small tree you can see in the back of my clear shooting lane. Anywhere near there and I could get him. I could see him walking in, walking in... I was breathing so hard, I think he heard me and looked. I lined the scope up, behind the shoulder and shot. He dropped. BBD. I have NEVER shot a buck and had him drop. Usually they run a little bit and fall. He went collapsed right there. His front left leg retreated back into his body and his head twitched and that was it. I sat there and called Dad. He was walking up from the bog (at the end of my first shooting lane). He had heard the shot and knew it was me. We greeted each other with a big smile and half hug. 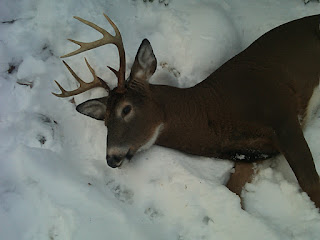