November 27, 2011
With the deer down, I filled in Dad with what happened, how I didnt shoot when he was in the first shooting lane and all of the excitement that goes along with the hunt. Dad walked over to the deer before I did and counted the tines. He has never shot a 10 pointer (he has shot a lot of 8 and 9 pointers that were big deer, a few over 200lbs) so to get such a big deer was really great. 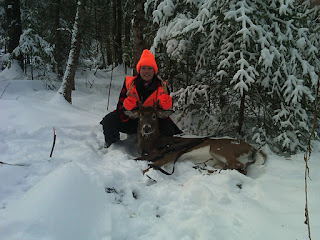 When we started to gut him, we smelled a horrible stench. This deer was very much in the rut and since they carry their sent in their lower legs, it was the strongest right near us, where we were holding his legs and gutting him. Whew! It was bad. Dad said he has never smelled a deer so stinky. And since he was heavy and we were a distance from the truck, Dad decided that he was going to get the tractor to get the deer out of the woods and back to the truck. 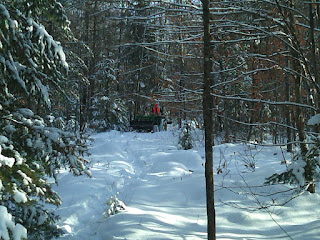 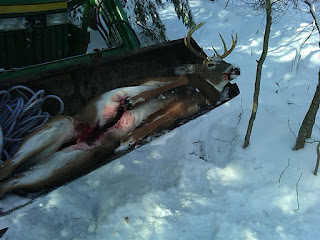 I led the parade out of the woods while the deer got a nice rid in the bucket. We loaded him into the truck, took him to get tagged and brought him home. 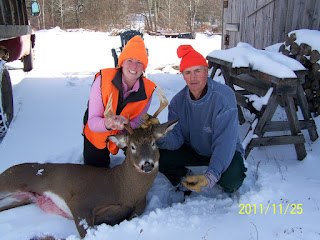 It was a great season, with wonderful weather and snow at the start and end. It was so much fun seeing the tracks around the house and in the woods; seeing the deer beds and then having my first big buck walk out in front of me and be able to take him down. Wonderful end to a great season.

Thanks for coming along during the season!