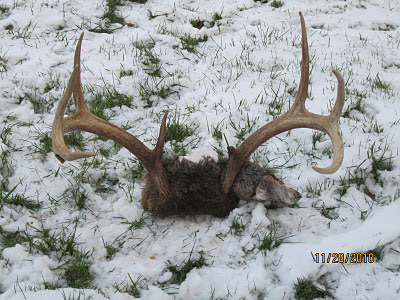 As a funny follow up to Steve's blog about coyots, I was going through photos for my Dad's album (every year that we get a deer, I add more pictures) and found these.

Dad found this deer last year when he was out walking around and I was in my seat. It was, as you can see, a nice 8-pointer that had been taken down by the coyots. When Dad told me about it, I asked to go see it (Im weird). The deer was in a grouping of trees. Its nose was gone, as was the lower half of the body. A beautiful deer that would have been a nice tag - taken down by coyotes.

After lunch, we took the saw back into the woods with us and cut off the antlers. One, because they are impressive - 17 inches in the inside and two, because it is a reminder that coyots are getting more brazen and less choosy about which deer they are picking. I highly doubt this deer was sick or wounded.

Just one more example of why it is so important that Maine works to get the coyote population back in check. 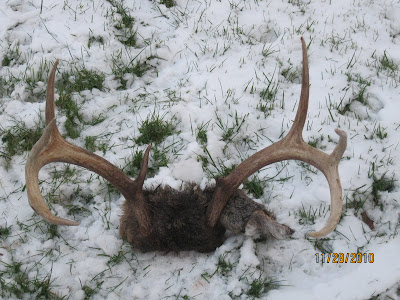 And yes, that is the deer's ear attached to the rack. It was frozen and Dad wasnt going to worry about it. =)