February 21, 2012
On Sunday, I went ice fishing. I had never, ever been fishing before (unless you count the time I caught 13 sunfish when I was maybe 10) and had a vague idea of what to expect. I relied on this to shed some light on what to expect. 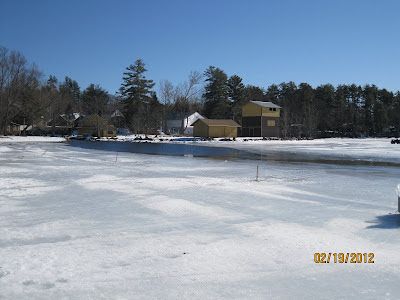 I was at the pond at 6:45am, trying not to be the late kid and I brought my dog. The hubby was supposed to come but got the flu so the dog and I fled. I had dressed a little warmer than if I was going to go sit in a tree for 6 hours waiting for Bambi, but not by much. I used it as an opportunity to test some new layers I bought a month ago.

Rabid had given me directions (not quite accurate, but not to worry, he gave his dad the same ones) but I had a good idea of where I was going since my best friend grew up on the road we parked on. It was beautiful out. A little chilly, but a wonderful February day. I was really excited to witness first hand what all of the excitement was about when it came to ice fishing. 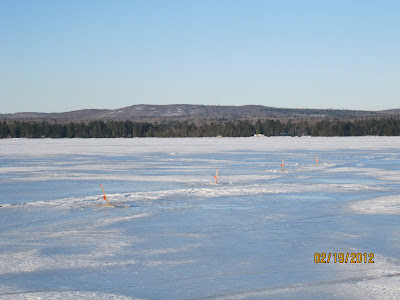 Duckman was gracious enough to come get me on the 4 wheeler but my dog is a spazz and I ended up walking to the fishing spot, but I gave Duckman some equipment to carry so I didnt have to. With a backpack full of extra layers, snacks, lunch and water, I made my way down onto the ice and across the pond with Leah.

Two days before I was supposed to go smelt fishing with coworkers but the shacks were pulled off the ice that day because of the warm temps and overall lack of ice. Rabid will confirm, but I must have asked him 4 or 5 times how much ice there was on the pond. I was thrilled when I saw we were camped about 75 feet from open water. I relaxed a little when I saw that with every hole, there was at least 6 inches of ice.

Dad said 6 inches of ice is safe. I trust Dad!

I had just enough time to set down my stuff, unhook Leah from her leash and look around when Rabid put me to work baiting my lines. Up until this point, I was hoping I could play the girl card and have the baiting done for me. I also like to tell folks that I am a visual learner and need to see things done over and over again before I get it. Rabid didnt buy it and I wasnt going to wimp out in front of all of the guys. So I learned how to do it (hook goes in just in front of the dorsal fin and not too deep or I could paralyze the fish and essentially have dead bait) and baited 4 of my 5 lines (I did need to watch Rabid do it the first time)and have the pics to prove it: 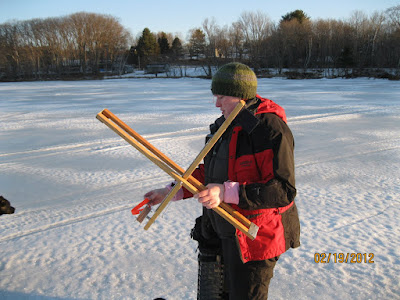 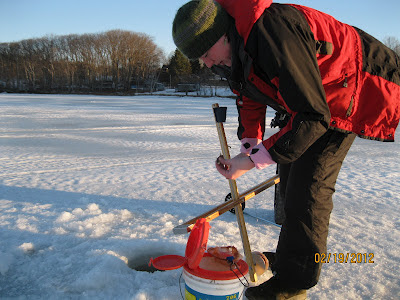 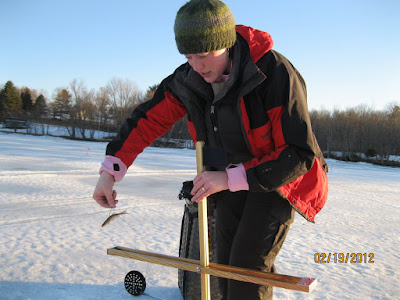 I had 5 lines in the water as did pretty much everyone else. I learned how to hook the flags and that the wind can make a lot of people really excited when a flag goes up. But, after a few minutes we were all set. 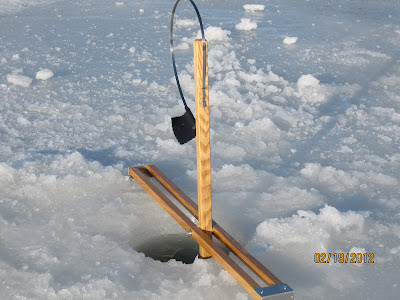 Everything was in the water and we started to wait for a flag...