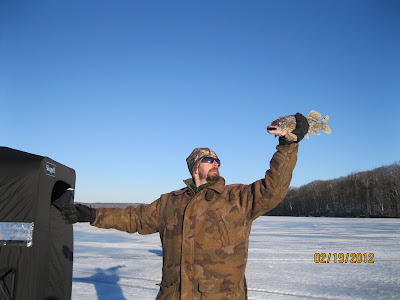 Before I arrived on the pond, Duckman had caught a 6.5 pound pike. I thought it was a huge fish and my dog had no idea what it was and kept coming over to smell it. All I could envision was her grabbing the thing and running. And then dropping it down a hole. Then I would owe Duckman more than I do (Leah thought she could help herself to some chowder). 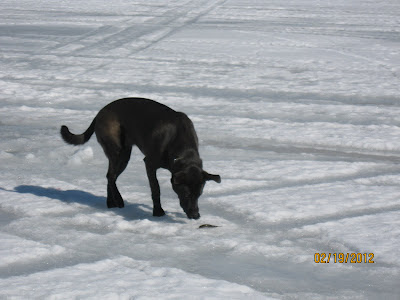 As Leah ran around, she found a dead bait fish and became intrigued. She would put the thing in her mouth, tail hanging out, run a little and then drop it. She had no idea what to do with the fish, what it was or what she should be doing with it. The last thing I wanted was for her to swallow the thing. So instead, I ruined her fun - picked the fish up and put it back into a semi-frozen hole that Duckman had abandoned earlier. 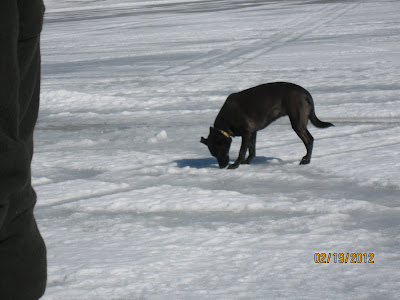 All she could do was try to figure out how to get it back. There was a thin layer of ice, so in some parts of the hole, she hit ice instead of fish. In the spot that I dropped the fish into, she couldn't quite get her mouth into the water enough to get it without driving it further into the water. After a couple of minutes, she gave up. But, being the dog that she is, she found Uncle Kim who had vienna sausages and Matt and Ryan who had peanuts they would give her. 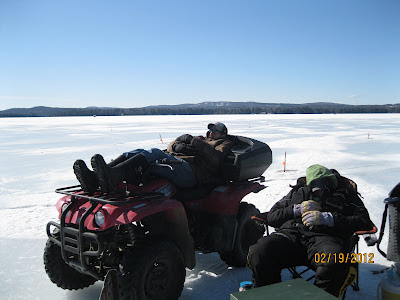 While this was happening, Duckman needed a rest. Trey, I took this picture just for you. Now, you can see what actually happens when they go ice fishing =)

While Duckman napped, Rabid, his brother Matt, his father and I played Cribbage. I didnt tell them that I play all the time with the hubby and friends. Or that my mom had taught my dad when they were dating in high school and that he taught me and my sister when we were young to help us with math. Instead, I was partnered up with Papa Rabid and we won the cut. And then we won the game. It was close and we won by 1 peg. We had first count on the last hand and pegged out. So. Much. Fun! 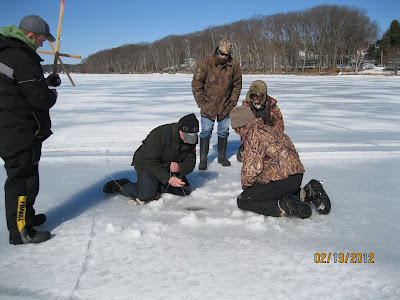 We had a few wind flags but we also had a couple of legit flags. Twice there were pike that tripped the flags. We would all run over to the flag, Duckman would set up his camera and all of these guys would start to work together to let out the line, when to start reeling, and if they could see the pike going after the bait. One guy would take the trap and begin to rel in the line, whomever set the trap would begin to work the line at just the right pace so that the pike would not be scared off and instead take the bait and be hooked. 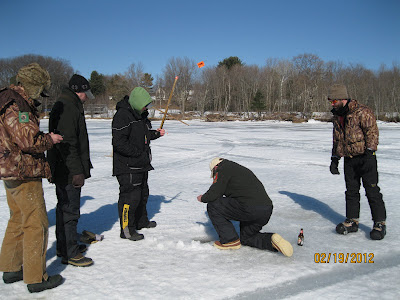 Unfortunately, I didnt get to catch my own pike, or even see one get caught. After I left, Matt and Ryan both caught one. I missed all of the action. But, I got a taste of why they spend days on the ice waiting for those fish. I put in a ton of time waiting for my deer and I went days without seeing anything more than my pet gray squirrel. These guys wait a few hours and can walk away with a few fish. Much better odds.
I had a great time and I am very thankful that Duckman, Rabid and the rest of the guys were willing to let a girl (and her dog) tag along on their outing. The camaraderie, games, food and stories made this a fun day outside. Im not quite at the point where I will go out and start buying traps myself, but I could get there. I just need a few more experiences out on the ice - and to catch a fish. Maybe, if I am lucky, the guys will invite me back.