on March 02, 2012
I priced out having someone else mount my antlers for me and decided that Dad and I can handle it. We are independent like that. So on Saturday, we cut off the antlers to my deer to begin making the mount for them. 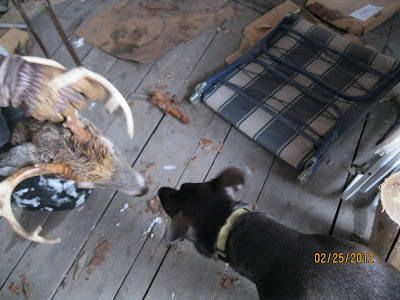 Leah had no idea what this was, but she was willing to go nose to nose with it. Then, Dad moved it and she took off running. Silly dog. 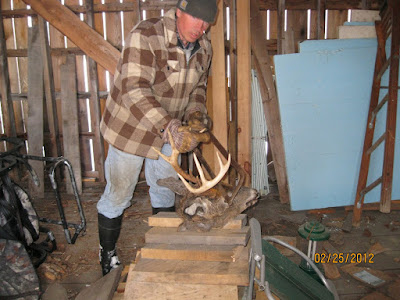 Dad's telling me to stop taking pictures and help hold the head.
You can see my tree seat on the left. 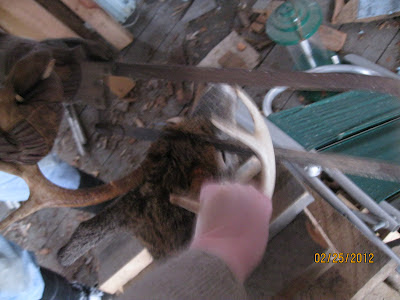 Action shot. One handed! and taken 3 months to the day that I shot him. 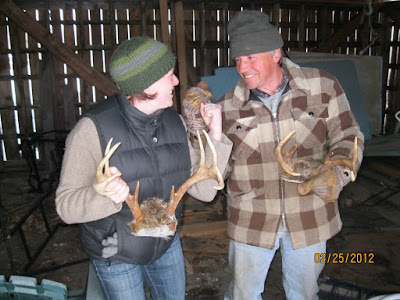 We each held up our antlers, mine from last year (we remeasured and they have a 13.25 inch spread) and Dad's from the 6-pointer the year before. He joked (I think) that the gloves are coming off next season and its every (wo)man for themselves. Hubby suggested we take a fighting photo. Don't we look mean??

I now need to figure out what step 2 is. I know I need to get the hair off the top of the scull, I just don't know how. Research!

While we were holding our antlers, we saw all sorts of common traits and couldn't help but wonder if they had some of the same genes. I will brush up on my Boone & Crockett scoring and take better pictures and we can compare in a future blog.