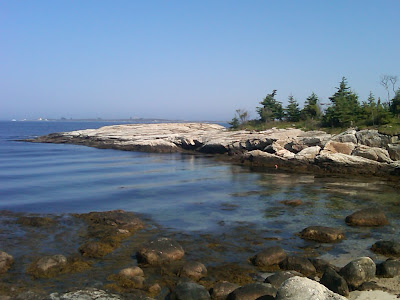 Over the past few years, I have been lucky enough to spend Memorial weekend on a great island off the coast of Maine. It is beautiful, relaxing and I can sit on the rocks for hours just watching the ocean.

This past weekend was a little more exciting than others. On Saturday morning, I took the dog for a walk and saw two seal pups on the rocks. This was about 5am (I know. So much for sleeping in on my mini-vaca) and no one was up yet. The seals were both alive and breathing but you can see from the picture that the seal in the foreground (let's call him Sam) is not in good shape. Neither seal was moving a lot but the little guy in the background climbing up the rocks (let's call him Joe) was a little more lively than the other. I stood there for maybe 15 minutes, much to my dog's dismay, and watched the seals. I took a few photos and headed back to the cottage to tell my hosts that I had found. 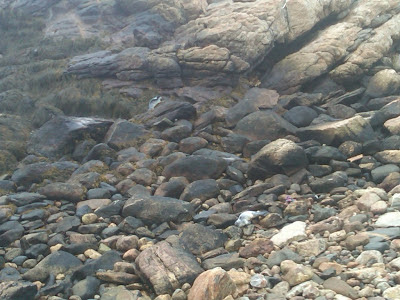 We looked up the number of the Marine Resources in Maine and called them to report the stranded little guys, or at least let someone know that there were pups on the rocks that did not look like they were in good shape. While it is common for pups to be left on the rocks, or out of the water for a long period of time while their mothers are feeding, these guys did not look like they were just chilling til Mom came back.
I called the number and got the answering machine. I chalked it up to the time of day I was calling and planned to call them back.

On an island, news like this travels fast around the neighborhood. After our brunch at 10:30 or 11, we heard commotion next door and assumed it was in regards to the seal pups. When one of my hosts went over, she saw people on the rocks "helping" the seals by moving them closer to the water. If you learn one thing with this blog post, here it is: It is illegal under the Marine Mammal Protection Act to handle these animals. What these people did was illegal and just plain stupid. One more time for good measure:

All marine mammals are protected by the Marine Mammal Protection Act. This law makes it illegal to touch, disturb, feed or otherwise harass marine mammals without authorization.

I went back in the afternoon, after everyone had left and watched as the tide came in. It reached Joe first and with every wave, he would struggled to stay on or get back onto a rock. Sam lay between a couple of rocks about 20 feet away from Joe and I could occasionally see him take a shallow breathe or move his flipper (it might have been a twitch-like reflex and not him intentionally moving) as the water same in and washed under him.

It was a very surreal moment for me. I love to hunt. If I am a good hunter, I will kill whatever it is I am hunting. With every deer I kill, I am removing an animal from the population, keeping the numbers in check, and the herd healthy. So why was I so concerned with these seals? For all I knew, they were sick and their mom had abandoned them on purpose to keep her colony healthy. But for whatever reason, I couldn't stay there and watch these two little seals be overtaken my the ocean. I took a deep breath and knew that nature would do what it was going to do. 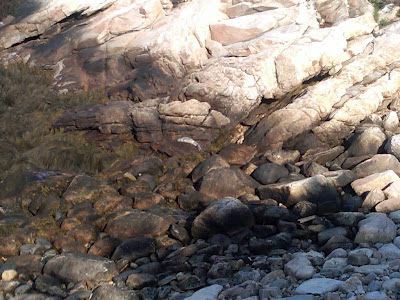 The next morning (7am this time!), I went back and was surprised to see a seal on the rocks. He was in the same area as Joe had been the day before and since Joe was the livelier one, that is which seal I assumed it was. He was in the shade when I saw him the first time and he lifted his head and flippers slightly. He was not moving too much and I knew with the hot sun just a few minutes away from hitting him, more people would be out walking. I went back to the cottage, got my phone and headed back. I tried the Marine Resources phone number again and Linda picked up the phone. I was surprised that someone was there on a Sunday morning! I told Linda that the seals had been on the beach for more than 24 hours now (meeting the minimum time frame for when you can assume a pup has been abandoned), that there had been two the morning before and folks had moved them closer to the water and now there was only one seal. She asked if I could see it moving, if there was an umbilical cord that I could see and could I send her photos of the seal for them to see the size, location etc. She took my phone number, made sure I would be on the island all day if they needed to reach me and thanked me for calling. 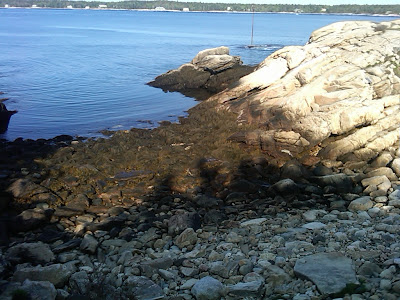 About an hour later, I got a call from the biologist who was coming out to get the seal! I made plans to meet her at the dock and use one of the wagons we had to help transport the seal back to the boat. I went to find my host and tell her that they were coming to get the seal. She was standing on the path, looking at the little guy with about 5 other people. A part of me was glad that others were around so that they would not try to move the seal again (if they had been the ones to do it the day before). 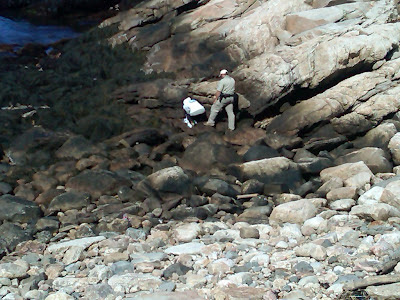 The following pictures are of the seal rescue. Dominique arrived with a dog carrier, headed to the rocks and scooped the little guy up in her arms. Her concerns were that he was not making noise or crying out. She said his temperature was good but he was malnourished and they would be doing a full work up of blood tests, start him on antibiotics and then send him to Southern Maine for rehab. She was glad to see that he was suckling when he his face was up against the edge of the carrier because it meant he was hungry.

Surprisingly, (but not really because Maine is really a small community) I had worked with Dominique when we were both in Bar Harbor so we exchanged cell numbers and I plan to follow up with her on how Joe (now referred to as Seal #26) is doing. 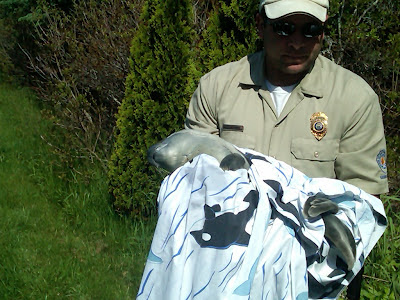 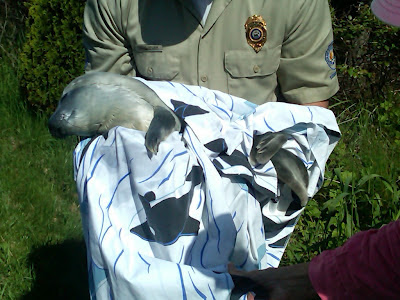 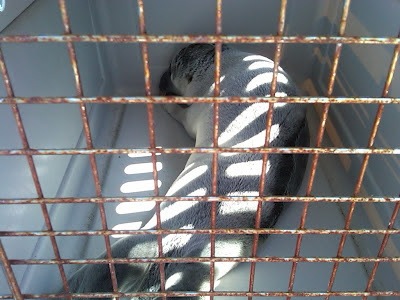 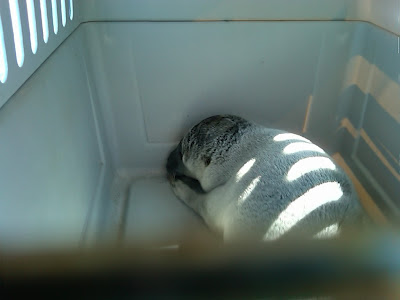 UPDATE:
I sent Dominique a text to see how the seal was doing. Her response:
Bad news, the pup died in transport. Never made it to rehab :( Had some very bad infected wounds from a blunt force trama- falling off the rocks is my guess. Sad! But thank you for calling it in!