July 23, 2012
There is nothing appealing about hunting turtles to me. In my mind, they are kinda cute, are worth getting out of the car to move them across the road and fall into a category of acceptable pet should any future kids want to have one. 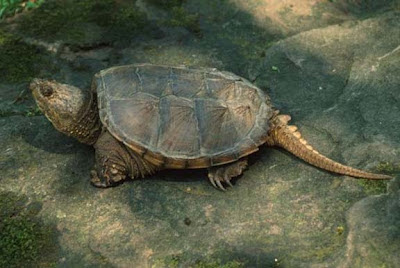 At a family gathering this weekend, I got on the subject of hunting Snappers with my Uncle who has been hunting them in Massachusetts and selling them in Maryland. When I asked him why he doesn’t hunt in Maine, he said because it was illegal to do so if he want to sell them. When you catch them in Maine, you also need to kill them immediately and if you know anything about turtles (which I did not), they do not keep in a cooler of ice like a dead fish will. While he has had turtle soup, my Uncle said that he would not eat it on a regular basis, “You know how fish absorb mercury and the chemicals in the water? Turtles are in the water a lot longer, they live longer, so they have the ability to absorb more of that into their system.” He totally sold it for me – one meat I can live without trying.

So how do you catch a turtle? My Uncle said he sets up traps along a river in Mass. and during this last trip, he came back to the traps 30 minutes later to find anywhere from 1-3 turtles already caught. He explained how he uses the hoop traps, which until I looked them up, pictured them to be similar to the opening of a lobster trap. Turtle goes down a cone shaped entrance, gets some food and cant get back out the small end of the cone. He collects the turtles, separates the males from females and hands them over to the buyer. Live weight he gets (totally going my memory and approx. $$ amounts here) about $1.50/lb for males and $2.60/lb for females. So, when all is said and done, he could net $1,500 or more each trip.

As we talked more a few questions came up: why not regulate it in Maine like other States? My Uncle pays $30 for a permit and why not have a minimum size of 12 inch diamter? to ensure that the smaller turtles can stay in the water and reproduce. Like any population, if there is not monitoring and a portion of the population dying/being killed every season, there runs the risk of over population, an increase in illness and the decrease in the overall health of the population. “No hunter or trapper will do something that is going to impact his – or her – hunting. Especially if they are making money doing it.”

So my question to all of you is this: would you (or do you) hunt turtles? Do you think it should be legal to hunt and sell them?