September 18, 2012
We could not have asked for a better weekend for the BOW Skills Weekend. It was crisp, mostly sunny and the excitement was palpable. 106 women, 36 different sessions taught be awesome instructors and most of the Friend of Maine BOW board members were there. It was a time to test our skills, try new things and learn to push ourselves to do things we might have thought we could not do.

For me, I wanted to try Don Kleiner’s session: Intro to Freshwater Fishing. After my trip to Jackman, I needed all the help and advice I could get.

Big, big kudos to Don! If you can ever take a class he is teaching, do it. He encourages questions, clearly knows what he is talking about and has an infectious laugh. The 6 of us in his session were put at ease and enjoyed having a smaller group to be able to get more one on one instruction. 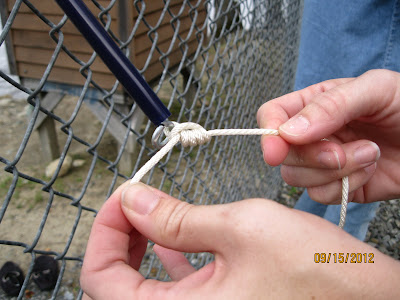 Don introduced himself, his business and assured us that if he could teach kids to fish, we shouldn’t have a problem. He got us started by practicing the improved clinch. His confidence in us was fantastic and I think we quickly got the hang of it. He explained that when using monofilament line to tie the knot, we needed to wet the line to reduce the heat (which could cause the line to weaken or break) and thus, keep the line strong. One woman in our group laughed, “So that’s why my husband does that! I thought he was just weird.”

Don had us piece together our rods, tie on the hook, a small sinker and a bobber. Then it was off to the water’s edge to catch fish. 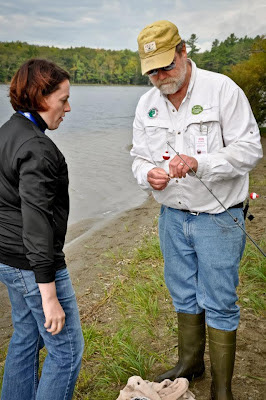 We were using closed-faced rods, so unlike my rod at home, there was a button that I needed to push to let the line out. We spent time casting without bait on the hook first. It was a sad state of affairs. I tried and I tried and the bobber would end up maybe 2 feet away from me. At its worst, it ended up at my feet. Don assured me that it was equipment failure and attempted to prove it. His cast went about 20 (probably more) feet into the water. I tried again and again. Having helped the other women with their casting and preparing to bait our hooks, Don assured me that there must be a knot in my line and processed to pull line out of the reel until he found what might be considered a knot.

With a new line ready to go, I started casting again. Only this time, I didn’t think about where my feet were, where my hips were or really where my thumb was when I released the line. And it worked! Before I knew it, I was getting the bobber more than 5 feet in front of me. My first cast with a worm, I caught a sunfish! (and proved that Darwinism is a real thing.) Soon, the group had caught sunfish, small mouth bass, large mouth bass and I caught 2 yellow perch. Pretty much everyone in our group had caught a fish and got the chance to cast a lot. One woman said she wanted to be able to get her fishing pole ready by herself because up until that point, her husband had done it and just handed the pole to her. Another wanted to prove to herself that she could put the worm on the hook herself, without getting grossed out. And I wanted to learn a new skill that will hopefully turn into another outdoor passion. 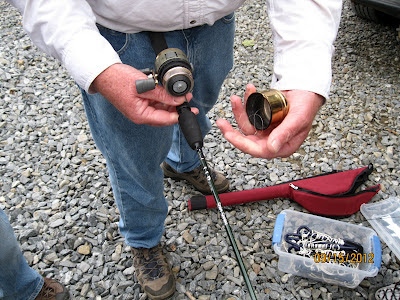 I loved the class and became confident enough that when I got home Sunday night from the weekend, I knew how to take apart my fishing pole, how to tie off the line and where to store the rod until next time.

Knowing that I can now go out and be a basic level fisherwoman all by myself is a great feeling. Now, instead of the comedy of errors that was the trip to Jackman, I am now confident that I can catch something, even if its a sunfish the next time I go out. I am ready now! 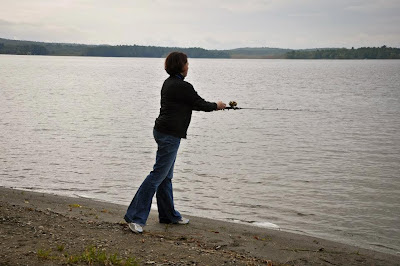