32 years and worth the wait!

I saw this bull coming at me on the skidder road. I can tell he is a good sized bull and he is following behind the cow and calf. He stepped out, I lifted my gun up, placed the cross hairs on him and squeezed the trigger. Nothing happened.

Rick and his family have been hunting in Maine for more than three generations. Each year, Rick faithfully puts in his application to get a moose permit and each year, his name is not drawn. Until this year! After 32 years, Rick saw his name appear but it was not an ideal situation. He drew a cow in zone 17 for the October hunt, starting Oct 8th. Not ideal, so Rick put his permit up on a couple of websites to see about a possible swap. Within 24 hours, an email hit his inbox accepting the swap. Frank had drawn a bull in zone 4 for the September hunt but his Dad had drawn a bull for October in zone 17 and it would be the first time (and maybe last) that the two could both hunt for moose together. Trade done.

In preparing for this year's hunting season, (this is where Rick far exceeds me in hunting and preparation) Rick drove to Maine in July to start scouting areas in zone 4. He researched choppings on Google Earth and he went into the woods a week before his hunt was to start to keep scouting the areas.


In the first four days, I saw 17 moose. I saw 12 in the areas that I wanted to be in. It was amazing. You could hear the bulls racking and calling to one another. It is so cool to be able to make a call and have an animal answer you back. 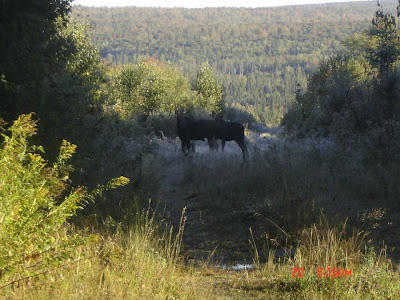 With his subpermittee and a couple of friends, Rick headed out on that first early morning to the choppings he had been scouting. Within the first half hour the group had found a cow moving through the woods. Behind her… a bull. Rick lifted his rifle. The cow stopped, she had seen something move that she didnt like. Her ears started moving around trying to figure out what she has just seem. Behind her, the bull stopped. For minutes, the cow stood uneasy. Then, she bolted. As she ran, Rick headed in that direction in hopes of getting the shot off at the bull. But it was too late. The rumps of the moose heading back into the woods was all Rick could see.

The next morning the group saw moose eating raspberries and had another great bull encounter but no shots. Wednesday was a wash. Thursday started off with some callings and grunt responses. Knowing that time was ticking, Rick gave his subpermittee permission to shoot a bull if the opportunity presented itself.

They walked parallel into the woods about 100 yards from one another. Rick could see an ear twitching and taking his time and slowly moving, he could see that it belonged to a calf. The question was, where was mom? Rick continued to walk when he heard some crashing coming from the direction of his hunting partner. A new cow and calf pair started coming through the chopping headed towards Rick. Behind that new pair; a bull.

"I saw this bull coming at me on the skidder road. I can tell he is a good sized bull and he is following behind the cow and calf. He stepped out, I lifted my gun up, placed the cross hairs on him and squeezed the trigger. Nothing happened. I couldn't believe it. All these years, I've been hunting and I forget to take the safety off" , "He stepped out into the chopping and I put the cross-hairs on his temple and squeezed the trigger. He dropped right where he was. Dead." 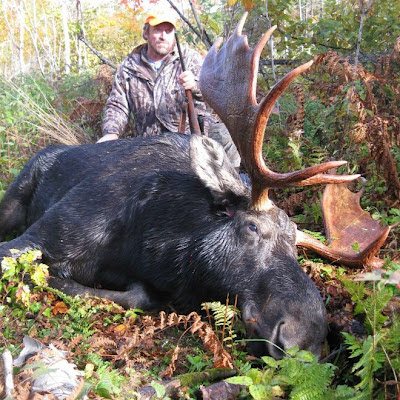 The elation that comes from a successful hunt is something any hunter can appreciate. To be able to accomplish a goal that you set 32 years before is amazing. Being able to shoot a monster moose, in the north woods of Maine with your friends is an experience any hunter would be thrilled to have.

It took Rick and his friends 8 hours over the course of two days to quarter and remove the moose from the woods. Weighing about 1000 pounds and with a 42 inch spread, this moose is more than a great hunt, it is a great story and a great example of the tradition of hunting in Maine. 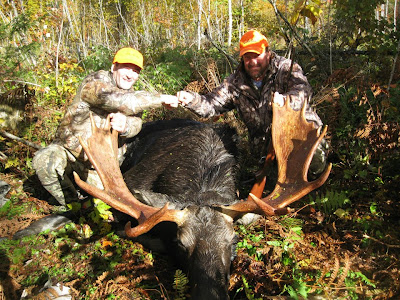