Need to shoot a shot gun to be ready for the turkeys!

April 04, 2013
For 10 years, I have been trained to look for that quarter-sized spot, half way down the crease of the shoulder. That is where I would set my cross hairs and shoot. That one small spot to ensure that the deer I was hunting would die a quick death. The idea that I would have many pellets in a shell and just sort of aim at what I was trying to kill is something I am trying to wrap my mind around.

Hubby and I were up at Mom and Dad's for Easter weekend and decided to break out the guns on Saturday afternoon. We were using #6 and #8 shells (I apologize right now for any and all incorrect terminology that I am about to use! I will get it after a while) but will be hunting with #4. Dad has a pump 12 gauge and a break action 12 gauge. The neighbor stopped by to talk to Dad, found out I wanted to turkey hunt and brought over his 12 gauge for me to use. 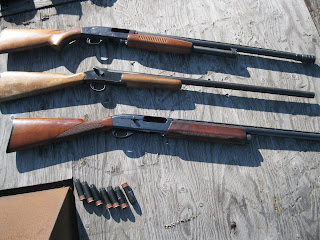 It is a Remington 1100 and probably the lightest gun I have ever held. But it is a semi-automatic and this girl is use to a shoot once and have to manually jack out a casing before you shoot again. My 30-06 becomes useless after one shot until I jack the shell out - and I like that. I don't want to be in a position where I get excited and more ammo comes out of the gun than I am ready for. Solution: put one shell in the gun and be done with it. Until I am MUCH more comfortable with it, that is my course of action and Dad can be my backup, second bullet.

Mom cautioned me to be careful (since apparently, the gun kicks into my stomach and not my shoulder) and hubby was concerned that the noise would be too much for the baby (so I wrapped as many vests as I could around myself and ended up with 6 layers between my skin and the wind). 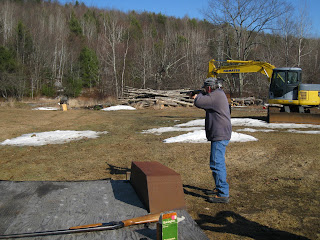 Dad took the first shot to make sure everything was working and firing the way it needed to.  He said that the shells were sticking with the pump action (or maybe it was both of them), so he wanted to see if they would stick and he would need his knife to pop them out.

It was a little breezy but a beautiful day to be outside and shooting guns, especially for a first timer like me. 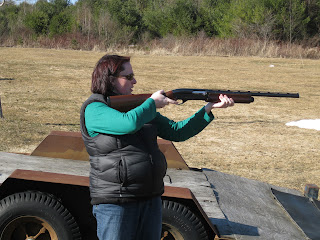 I had Hubby snap a photo of me shooting so I could see how bad I looked.  When I deer hunt, I do so sitting down and can rest the gun on something.  There are so many new things to do now; open sites, holding the gun while standing up and as you can see, I am leaning back more than I should be. And for a little bit of an ego boost, please remember, I am also 7.5 months pregnant =)

Both Hubby and Dad did say that I brought my head down more when I actually shot (this photo was taken a minute or so before I pulled the trigger).  It was the 12-gauge Remington and was so light and easy to handle.  The trigger pulled like my 30-06; you barely think about squeezing it, and it goes off.  I want one! 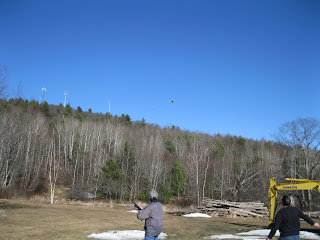 When the three of us had successful emptied a box of shells, we collected them all, put them back in the box, and Dad and Hubby thought it would be fun to throw the box up in the air and see if Dad could shoot it with the last shell he had.  It rained black and red shells as he hit it.  Hubby tried the same thing as Dad threw up an old, empty paint can (yes, we pretty much shoot at whatever is lying around).  The can went up and down without any additional battle scars and we all got a good laugh.

I feel good about my first turkey hunt coming up in just a few weeks!  Wish me luck!!


Variables for the start of the season that could result in a very interesting hunt:
* I don't shoot things that are moving fast - I watch them go buy and then think huh, I should have shot that.  I need a solid 10-15 seconds to process what I am seeing and what I need to be doing.
* Turkeys are smaller than deer and don't have fluid movements
* Shot gun without a scope vs a 30-06 with a nice, accurate scope