We took to the woods 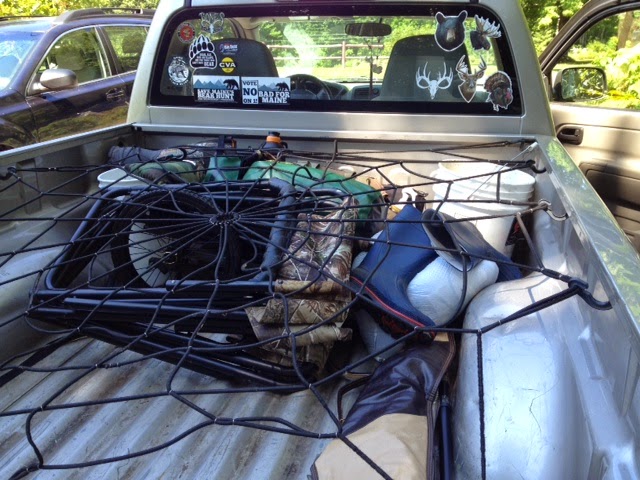 I was nervous. Ridiculously so.  I was seeing the big bears that we had coming in on the cameras at each site and I knew that I had to make a damn good shot if a bear came in. I has shot three times to get my gun sighted in and knew that it was right where it needed to be - and I was comfortable making those shots.

I packed all of my clothes, which were washed in anti-scent detergent and properly washed and stored with anti-scent dryer sheets. I showered with my anti-scent soap and put everything into the car.  As I sat in the driver seat of the car going through my mental checklist, I realized that my gun was still inside.  A quick run back inside and I was really ready to go this time.

At Steve's, I prepped some bait for the day.  I was a pro at this point. It was hot - 86 degrees and no breeze but regardless of all of this, it was opening day of bear season!  We had lunch, put everything in the back of the truck and were off to bait sites in the woods.

The plan was to get to the site around 2pm and take our time getting into the blind.  The last thing we wanted was to get sweaty and then have to sit for more than five hours.  I was still nervous during the drive up but I knew I had everything I needed and a gun that was ready and could do the trick.

As we turned off onto the dirt road and rounded the corner, there was a jeep parked where we normally park.
Hunters?
Campers?
Foragers?

They had pulled up parallel to the road, turning the three potential spots into one.  We pulled up along side of them and Steve went to find the owners of the jeep.  Whomever was out there needed to know that we were planning to hunt and that there were plenty of bears coming into the area.  We also wanted to make sure that if we did shoot a bear and it ran a little ways before it died, anyone else around would be aware and know to expect gun shots.  I waited next to the truck and got my gear unpacked.  I heard voices in the woods and then saw Steve coming out shaking his head
" We have to call the Ranger.  They have a fire going in the middle of the woods.  No fire ring and no rocks.  Just an open fire in the middle of the woods surrounded by pine needles."

It set us back an hour but eventually some very drugged out hippies from out of state emerged from the woods.  One girl and two guys reluctantly packed up their jeep and angrily drove off, honking the horn five or six times as they left.  They even turned around and drove back by, making sure the honk then as well.  The ranger came by and looked for the fire.  The hippies had covered it up using pine needles (nature's kindling) and it was still smoldering so he had to soak the fire to prevent any flare ups from starting.

Loud voices, a random fire and some less than polite harassing hippies and we were finally heading into the woods.  And I was even more grateful than ever that I deer hunt on land that we own!

In the blind, I got my steady stick set up with my gun  and we waited.  It is weird when you are in a new place - the sounds and light is new, so it takes a while to get use to it.  This was my first day in the blind so everything was new and took some getting used to.  Every year I have to readjust to the fact that squirrels really don't sound like every other large animal in the woods but for those first few days, like most hunters, you swear that what you are looking for be it deer or bear, is coming in when in fact it's a squirrel.

Steve and I waited and waited.  I visualized the bear coming into the bait site and the exact shot that I would take. We hadn't seen any sows and/or cubs on the cameras just good looking bruins of all sizes coming into the bait.  And one massive bear that I wasn't really sure I wanted to see in the woods.

As soon as legal hunting time was over, at 7:58pm we packed up and headed back to the truck.  The bears were around and were steadily coming into the bait but these are wild animals and there is no guarantee that an animal will show up when you are there waiting for it.  It's nature.  It's hunting.  I love it.