A once in a lifetime Black Bear

on October 17, 2014
I was glad that I had brought extra layers when we stepped into the 29 degree October air.  It was going to be a perfect hunting day with bright sun, cool temps and a great view that showed off Maine's fall foliage.

Tim Cote of Cote & Sons Guide Service was taking me out on a guided bear hunt with his friends Al, Scott and Scott's two boys.  And Tim's six Walkers, pups Boy and Lady, Jill, Emma, Garth and Moose.  We headed for the Maine woods when it was still dark out and as the first light was breaking, we turned off the paved road and started to head deeper into the woods on some old dirt roads.  Tim let the dogs out to stretch and run around the truck as we slowly drove down the road.

I was taking in the view and talking to Tim when the dog's demeanor changed and they began to bark. First one, then two, then all of them were barking and running up the mountain and into the thick forest Maine in known for.  Tim pulled out the GPS to see where the dogs were.  We watched them run as Tim explained that each dog has their own GPS collar that allows him to see where they are, how far away they are and he can make sure they do not go onto the paved roads and into any potential danger.  In the 19 years that Tim has been raising and hunting with dogs, he has used technology and thorough training to make sure that none of his dogs were seriously hurt on hunts.  He has never lost a dog.

Listening to their barks change and watching their location on the GPS, Tim announced, "They have a bear." He showed me on the GPS where the dogs were and in what position they were in.  For example, Moose was sitting, "Because he likes to sit back and look up at the bear."  Emma and Boy were at the base of the tree with their front paws on the tree and their back paws on the ground.  They may have had a bear in the tree but was it a sow with cubs? was it a cub? or a small bear that would be too small to shoot?  And would the bear stay there?  There were a lot of variables in play.

We drove slowly up the road until we came to a washout and had to pack up our gear and start hiking.  I was focused more in my awe of these incredible dogs than I was the realization that we were hiking towards a bear.  The sun was totally up now and the cool air felt good as all of us hiked up and up and up, bushwhacking for most of the way.  The dog's barks were getting louder and louder but I could not see them.  Tim stopped in front of me and pointed up, "There's your bear."  All I could see was a black blob in the Maple tree.  We were slow and cautious as we walked up to the tree.
"That is a nice bear"
"That's a good bear"
"He's a shooter!"

I had seen bear before on two occasions; once when I was in grad school and a sow and cub came to eat at the bird feeder and once when I went out with Randy Cross to tag bear cubs.  I had no way of being able to size up the bear that was now in the tree in front of me. Tim and I walked around the tree until I could get a broadside shot.  While Tim, Al and Scott tied up the dogs, I found a spot and settled in.  "When we pull the dogs back, if the bear starts to come down, you need to shoot" Tim advised.  I was nervous.  I am not religious, but I said a prayer for a good, clean shot that would instantly kill the bear and feed my family.  With the dogs still barking, but tied up behind me and everyone safely out of the way, I found my spot, took a breath and squeezed the trigger.

I remember hearing Al off to my right telling me to jack another bullet into the chamber.  Tim stepped out from my left and yelled to hold.  I watched as the bear let go of the tree and landed on the ground.  I cried.

The emotion that came from a successful hunt and the respect for the animal I had just harvested got to me.  The dogs had worked hard to be able to give me the opportunity to harvest that incredible animal.  Tim and his group had put in hour upon hour, week after week and month after month of work to train his dogs and pull those big bears from the depths of the woods.  I was extremely grateful to all of them.  I looked at my bear in awe.  He was beautiful and I kept shaking my head, unable to believe that I had just shot him. 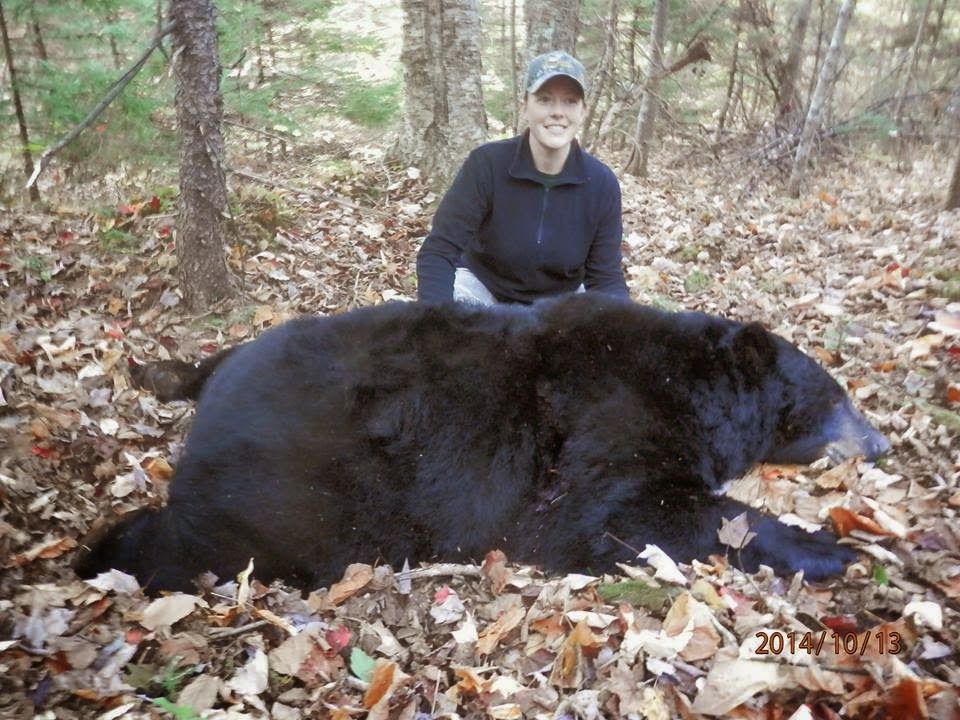 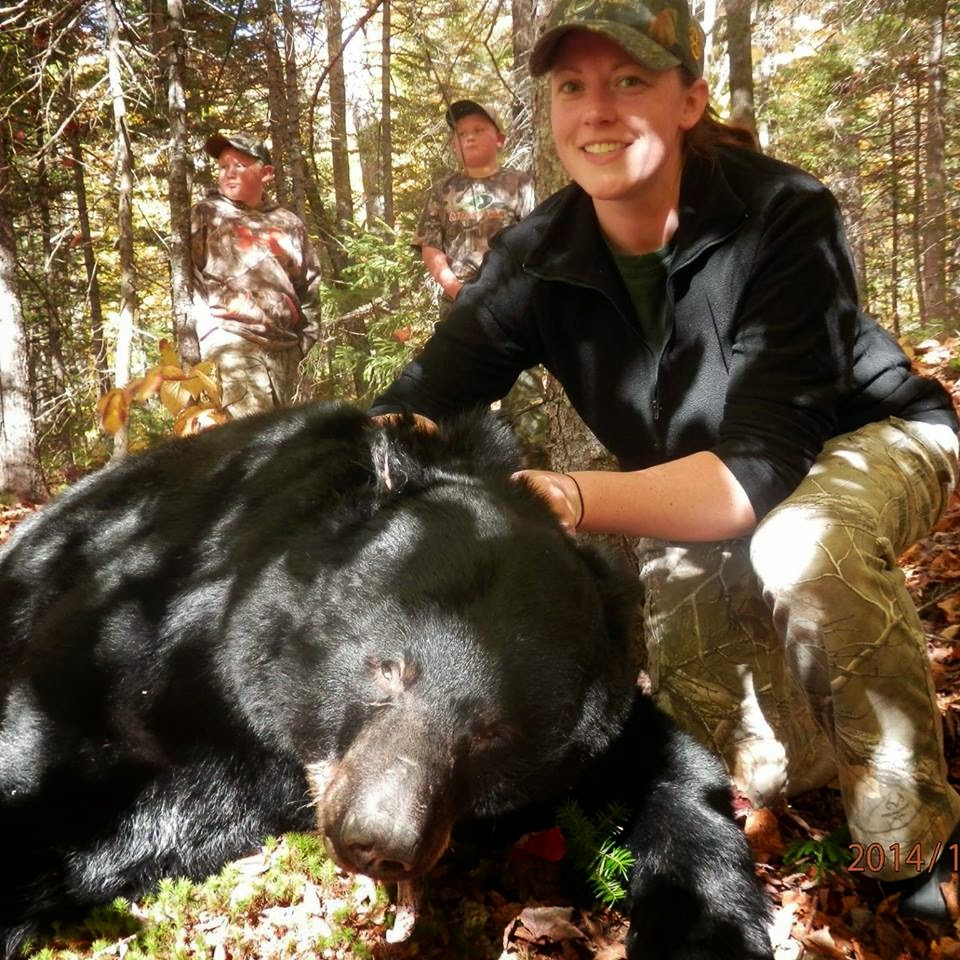 After we took photos and guessed how much he weighed (best guess was 350-400lbs), we marked the GPS with the bear's location and headed back to the truck with the dogs, to get the 4-wheeler, Jet Sled and more man power.  Tim's son Devon came along with his friend Julian and Tim's friend Dave.  We all hiked back up, took some more pictures and got the bear in the Jet Sled.  The guys were a well organized machine.  Scott drove the 4-wheeler, Al, Dave, Tim, Devon and Julian all took turns moving blowdowns and rocks from our path and helping to keep the bear in the sled.  It was an impressive operation, with all six men bringing my bear down to the truck. 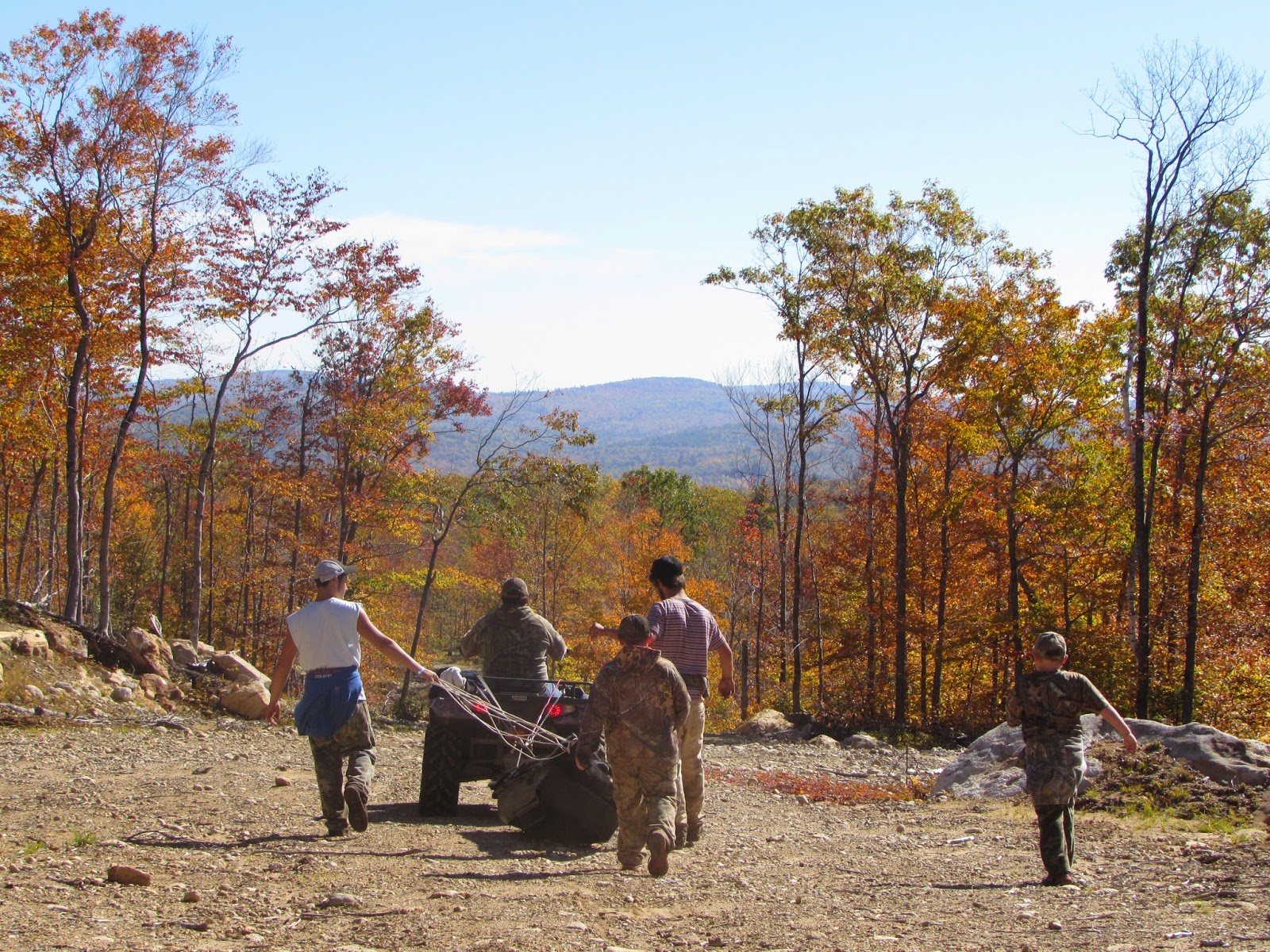 We finally got the bear down from the mountain and onto the back of the truck.  Then it was off to the tagging station to see just how much this bear weighed.

It was a proud moment to walk into the tagging station and ask to register and weigh MY bear. Two couples came over to look him and I was able to talk to them about why we needed them to Vote NO on the referendum.  We removed a tooth and gave it to the guy processing my tag, so that he could pass it on to be aged by Inland Fisheries & Wildlife (we are guessing that my bear is 8-10 years old). Finally, it was the moment of truth. The 350-400lb guess was blown out of the water when the scale started climbing, climbing, climbing... all the way up to 457! This beautiful creature that I was lucky enough to harvest was also one hell of a Black Bear.

Our fifteen hour day finally ended at Dave Finocchietti's butcher shop Dave's Deer Cutting in Gray.  Tim and I had said goodbye to everyone who was with us throughout the day and we stood talking with Dave as he began to skin my bear.  Under his long, thick pelt was about 5-6 inches of white jiggly fat.  My bear was impressive even while being butchered.
I had not intended to go bear hunting with hounds... I had not intended to go bear hunting at all this season (or ever) but circumstances and opportunities had paved the way for me to learn what it means to set out bait, hunt over bait, learn about trapping and now, learn what it meant to hunt bear with hounds. And I got a magnificent, once-in-a-lifetime bear.