Finally! I caught something

May 29, 2015
The family and I spent a day one weekend with Robin and among the outdoor activities we did, we got to go fishing!  Given my track record here, I didn't have much hope of catching anything but any excuse to be on a boat is good enough for me.

Hubby, O, Robin and her husband Steve and I piled into the boat and launched into East Musquash Lake.  O was all about helping me reel in the line and being outside.  He was not so excited about his lifejacket but it helped that we all had them on.

My goal for him is to be a fisherman so that he can better teach me - and so that we can cover all of our bases by having a hunter and fishermen bringing food to the table.

We trolled for a while and enjoyed the breeze and beautiful weather.  It was a perfect Maine day and we could not have picked a better one to spend outside.  It is easy to lose track of the day when you have great friends and great weather and are on a boat!

We pulled in the trolling lines and headed over to a shallow spot to try our luck at catching bass.  Robin and I stood up and started casting.  I was hesitant at first; hooks, a two year old and four adults on a boat and this adult is a horrible caster!  Robin told me to not think about it and just cast.  It was like she put a magic spell on me because I threw out the best casts of my life!  I didn't even care about what I was doing or if I would catch anything.  It was fun to be out there. 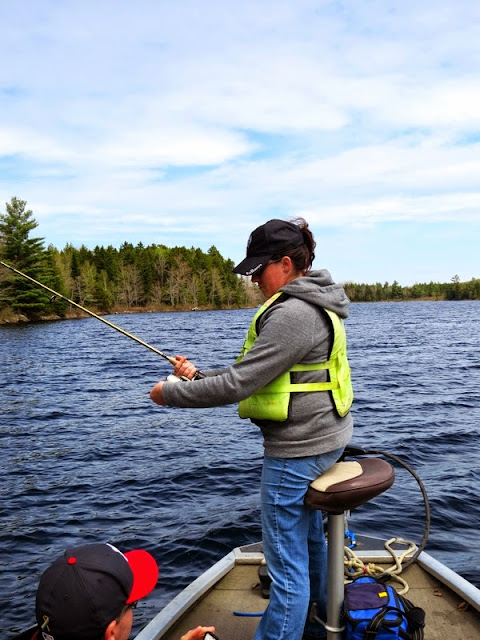 I got to the point where I could cast without really thinking about it and while still talking to everyone on the boat.

Then... I had something hit my line! I got something! I started reeling and reeling and remembered to set the hook, or at least try to.  I could see the fish on the line getting closer and closer... Robin and Hubby rushed to get the net ready as the fish came into view close to the boat.  It was a Pickerel and no one wanted to get that guy off the hook - they have teeth.  I started to lift him up from the water and he threw the hook.  The entire boat seemed to sigh. At least I had caught something.

I reeled everything in and straightened out my lure and cast again.  Another bite! I hoped that it was not that pickerel again.  I tried to set the hook (I really am not sure if I am doing it correctly) and kept the tip of my reel down.  I started reeling and Robin and Hubby were ready again with the net.  I could see the white belly as I reeled the fish in closer to the boat.  Robin put the net in the water and scooped him up Its a brookie! She yelled You caught a brookie!

I was just excited that I had caught a fish.  Can I keep him?  Steve pulled out the rule book and declared that yes, he was legal size if I wanted him.  Yes please!  But, that fish didn't want to go easily and got himself stuck in the net with the hook well embedded in him.  And Robin got hooked on the lake bottom with her rod.

Here is the scenario: Steve is driving the boat around to where Robin's lure is stuck in hopes of getting it unstuck.  I am holding onto my fishing rod because the fish is still attached to it.  Hubby and Robin are trying to get the fish off the hook and keep the two yer old under control who is not impressed at all with a flailing fish.

They got my fish unhooked and we got Robin's lure back and reeled in.  O calmed down but wanted nothing to do with the fish, except to know where it was at all times so he could avoid it.  We measured him up and he was a legal fish!  We packed him away so O wouldn't freak out and cast a few more times before heading in and on to our next adventures.

It is not the biggest fish but it is my first fish!  And he tasted delicious.