What season is this again?

June 01, 2015
The night before we were going to be heading into the woods, I looked around for my home made box call and slate call and could not find them.  I only had a store bought box call, push call and electronic call.  I have tried and can not use the mouth calls, so those are pointless. I gathered up my camo and got ready for the 4am excursion.

I can't help but wonder exactly why I want to go turkey hunting; it's a season of ridiculously early starts, ticks and warm weather. And ticks!  There is really not much that is appealing about it.  But, Dad and I were going to try to find a turkey.

We started off at the Sky Condo in a ground blind.  We sat and waited. I used the chalked-up box call and the electric call.  I listened and waited.  It was like muscle memory coming back to me since I sit and wait while deer hunting.  I called some more and heard a noise. I motioned to Dad and I watched as one, two, three sets of legs emerged 25 yards from us.  The deer never smelled us until they were almost 2/3 of the way across the grass.  It was fantastic to watch them stretch their necks and lick their noses, trying to figure out what they were smelling that they couldn't see.  They stayed there for five minutes before deciding that they didn't want to risk whatever it was they could smell and they turned around and headed back into the piece of woods that they had just left. 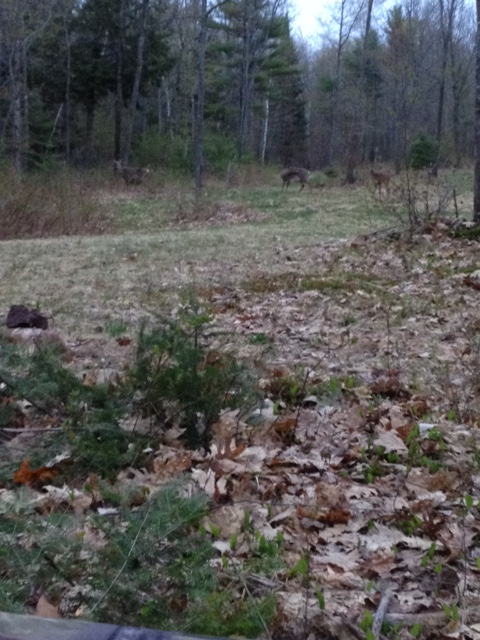 Dad and I called a little longer and then headed for the nearby corn field hoping to catch sight of a bird or two there.  We started walking up our regular deer hunting trail and jumped the same three deer.  They headed back towards the Sky Condo and we kept walking.  I would call every once in a while and listen.  Absolutely nothing.  I took pictures and did find a small turkey feather, proof that they had been around at some point.

About 100 yards from the field, I called again with the electronic call.  Branches snapped and we saw four or five deer jump.  It was a different bunch than the original three.  They moved their heads around the trees tying to figure out what we were.  I guess our camo worked fairly well.  I called again and the deer ran off.  If nothing else, we knew that we had a very healthy deer herd around.

The field was empty.  No other deer and no turkeys.  The flocks that we had seen just a few months ago seemed to have vanished.   We turned around and headed to a new location.

Dad and I slowly drove down the dirt road and stopped occasionally to call and listen.  There is a partridge that resides on a certain corner. He was there checking us out and seemed to like the turkey call.  He may have liked it but there were no turkeys around to answer.   We continued down the road and listened.  Again, there were a lot of deer tracks but no turkeys.  We got out of the car and walked around.  Dad found a deer tick on his leg and showed it to me to verify that it was what he thought it was.   He killed it but it sent me into a frenzy trying to make sure that I didn't have any on me. Yuck!

We called it a day around 10am because I had a graduation party to go to.  Dad headed back to the spot where we had just been to get some work done on the road.  He left his gun at home and, as luck would have it, he saw a bearded bird with three hens following right behind him.  That pretty much sums up my life as a turkey hunter!