Sure, I can shoot a bow

October 02, 2015
A few weeks ago, Dad got his old bow out for us to play around with.  He estimated that he hadn't shot it in about 40 years and he wasn't sure how good the string were so we were a little cautious.  We had some rusty broadheads and smiled when we confirmed that we were all up to date on our tetanus shots.

I had never handled a bow, much less shot one. I was excited, nervous and cautious.  Dad, being Dad, picked up the bow and drew back like he had just put it down yesterday.  He may not want to admit it, but he is a natural outdoorsman. Look at that form! I don't know any see it.t archery but I know decent form when I see it.
Hubby, Dad and I got a hay bale out of the barn and set it up about 20 yards from us. Dad missed once then put two arrows through the hay bale.  Not bunched but at least he hit the target.  Then Hubby tried it, but being a different size than Dad, he quickly over drew the bow and couldn't get enough drawback to get into position.  He shot anyway and the arrow went over the hay bale, bounced and sprang into the bushes never to be seen again. 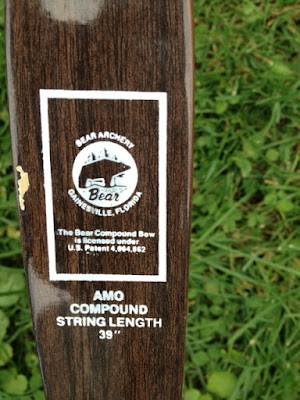 Then, it was my turn.  The following photos are my attempt to pull the string back.  I tried with all of my (nonexistent) might but I could not pull the string even half way back. 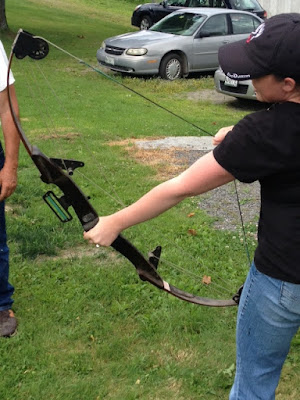 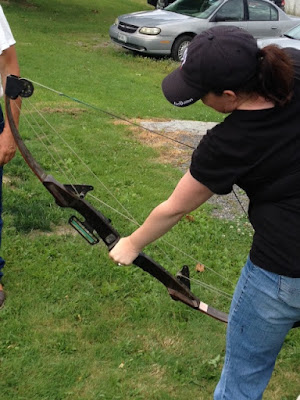 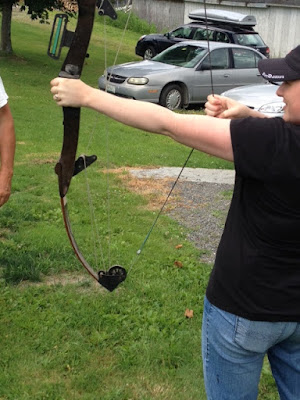 There was one blunt arrow that I attempted to shoot and I successfully killed the blade of grass that I was 10 feet from me.  Dad had no problem pulling the string, Hubby had no problem but I could not do it even with their encouragement that I was so close and the pressure would let off when I reached a certain point.

When we looked closely at the bow, I felt a lot better! It was set for a draw weight of 55-60 pounds.  No wonder I could not draw back.  We shot a few more times than packed it up and put it away until next time.  I am still interested in getting a beginner bow and I know realize that I will need to start really working out my arms, back and shoulders if I want to be successful and accurate when I shoot. 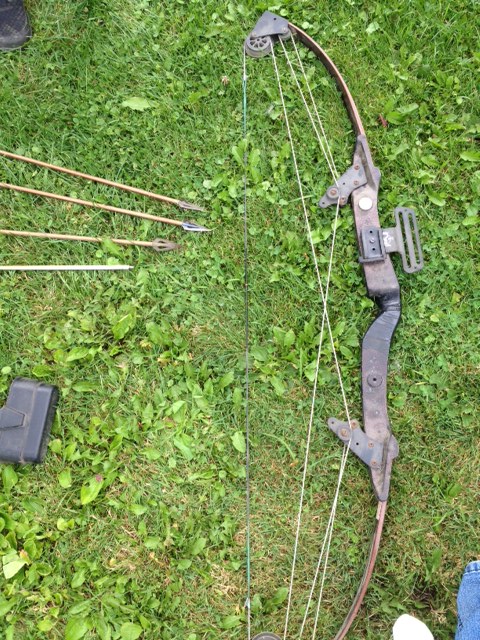