November 04, 2015
We kicked off the new season on Saturday and it could not have been a better morning.  The moon was out, the stars were bright and there was just a slight chill in the air.  It was 24 degrees.

After last year's last minute switch in sitting spots and my success, I let Hubby pick where he wanted to sit.  He wanted the Sky Condo and I took T3.  As the three of us walked along the path into the woods, the silence was broken by a single howl. It was loud and close.

Sound travels Dad said but we all knew that the coyote was close.  He was probably in the woods between us and T3. Luckily, it was just one coyote (only one was howling.)  We split from Hubby and headed directly towards T3 as another howl came.  We were walking directly towards the coyote. I kept thinking about the deer and how they were probably moving away from the coyote and further away from us and T3.  As we came to a field, the coyote howled again but he was further away at the other end of the field. I felt a little better.

I climbed into T3 and flashed my headlamp at Dad.  He walked back out to his normal spot and left me alone listening and watching more light creep into the woods.

This is the same location as I sat last year only now with a permanent structure, I was further into the woods and had more shooting lanes than grassy openings.  I scanned back and forth looking for movement. Even the squirrels seemed to still be asleep.

There were some early shots with one sounding kind of close (maybe someone shot that coyote) but no movement.  A half hour after the shots, I heard a noise behind me. I leaned around onto my sun porch but couldnt see anything. I turned back around and heard blowing and shorting. The wind direction was in my favor so I didnt think that the deer had smelt me from 16 feet up in the trees but something didnt smell right to this deer.  He snorted a few times and was gone. He never stepped out, never walked through any of my hunting lanes... just disappeared.

I have written that I love hearing geese in the nearby fields and without fail, a huge flock of geese flew right over me.  They were so close that I could hear the beating of their wings and the soft noises that they made to one another.  It was hunting season!

It was also Halloween and with a two year old, there are obligations that one must follow.  I had to leave the stand and be back at the truck by 10.  I also got to pick up my bear rug! So, after running errands and the noontime trick-or-treat route, the kiddo was napping and we headed back into the woods.

Hubby chose to walk, Dad went to T3 and I sat in the Sky Condo. 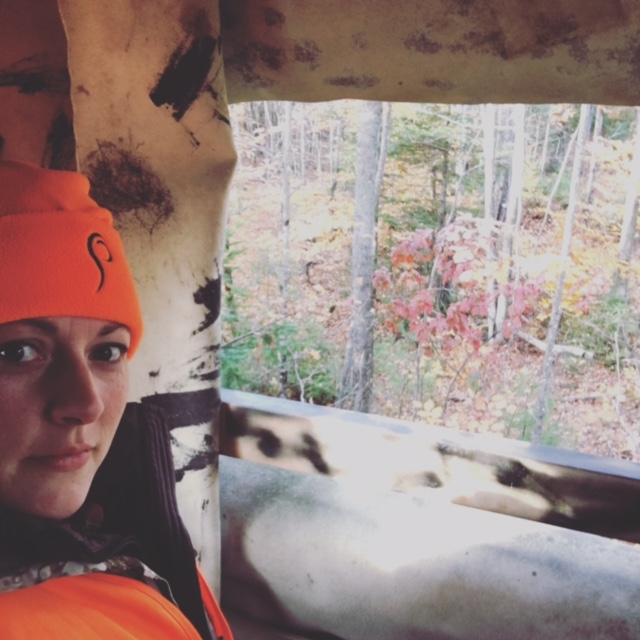 It was warm enough that I didnt need my wool jacket or gloves.  I sat and enjoyed the afternoon, the colors and the gratefulness that I have for being able to hunt with my family.  It was a perfect hunting day!

We met back at the car at 6pm.  Dad had also heard a deer blowing behind T3 but he couldnt see it. Hubby had jumped some does and had one stand her ground and yell at him while stomping her leg. I enjoyed the quiet.

This weekend, we will be out again and trying to get one of those big bucks on the ground!