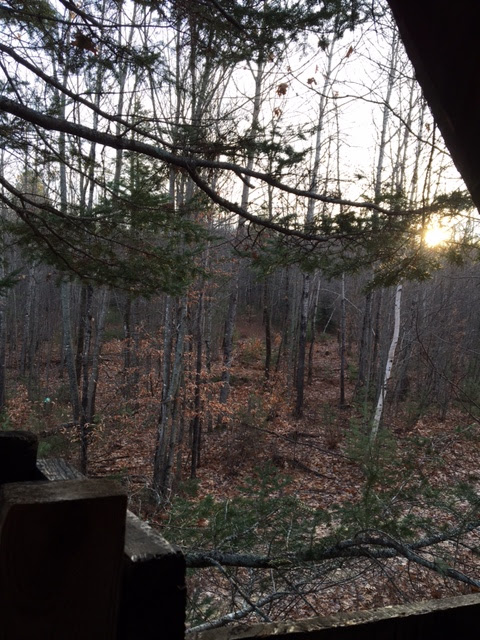 This is how hunting is supposed to be! Cold in the morning with a solid front on the ground.  Noisy but not enough to give your cover away. And sun. I love the sun.

I sat in the Sky Condo, Hubby was in T3 and Dad decided that since time is ticking, he would walk.  The plan was for him to walk the piece by T3 in hopes of jumping something towards Hubby.  Then, the guys would head my way and split up.  Dad would head east and loop around to my treeseat.  Hubby would make a loop west then swing east and come out at my treeseat.  When I saw Hubby at the foot plot, I was supposed to head immediately to my treeseat.  I was excited about this plan because I had not sat in my treeseat all season and I missed being more outside and exposed than in the bigger stands. 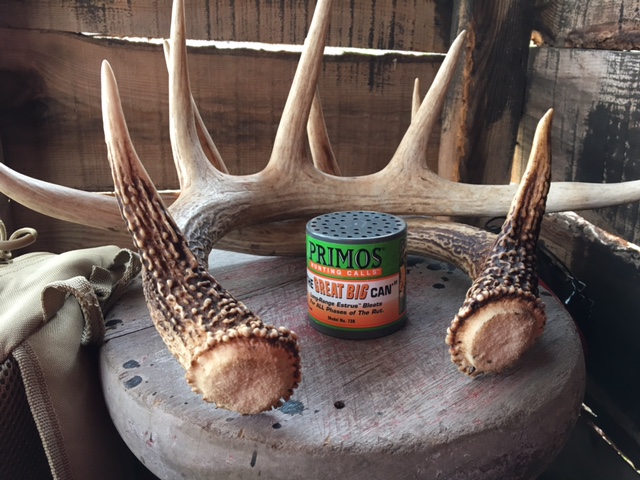 There was a little windy but nothing that would keep the sound of steps hidden.  I bleated the minute I could see color.  I waited a few minutes and bleated again.  I heard a bleat back! Was it another hunter trying to lure me in? Do does call back and forth to one another? I knew that there was a stand on the nearby property that may have hunters in it, but I couldnt believe that they could hear me.  But maybe.  I paused and waited and listed.  I heard a snap and my heart raced.  I heard crunching.  Things were moving this morning.  I couldn't see any movement in the treeline.  I rattled the antlers and waited.  When I rattled a second time, Hubby popped out of the woods! ha!

I called him over as I climbed down to told him that I was hearing movement and that there were either hunters nearby or a doe because something called back to me. He nodded and we split off.

I was 20 yards through the brush when I saw the first new sign of bucks (besides these pictures.) A new scrape! Finally!  But as I walked along the old snowmobile trail, I saw new rubs.  I checked a certain spot that is known for having rubs but there was nothing there.  Instead, there was a larger rub on a tree at an intersection between our own hunting paths. This buck was hanging out exactly where we were.  We have to run into him at some point, right? 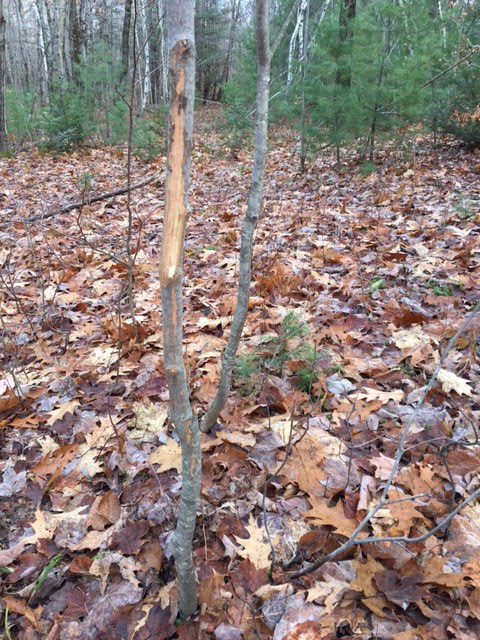 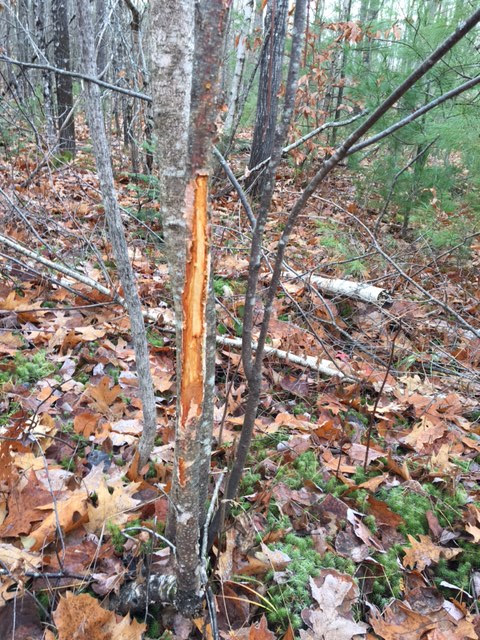 These were not there last week.  I was excited as I made my way through the trees and into my treeseat. It was leaning forward a little but with a quick adjustment to the seat, I was comfy and ready for the deer to show up.

Almost five minutes after I sat down, I heard noise coming from my right; where Dad was going to be walking through.  I saw a deer bounce through the end of the shooting lane.  It wasn't running like it was being chased, just that it needed to get away from something that annoyed it. Probably Dad.  I lifted the gun and pointed it at an opening directly in front of me where I hoped the deer would come out. I saw it bounce into the woods and didn't get a good look at it.  If I had to guess, it was a doe.  I dug into my coat for the doe bleat and called once.  I tucked it back into my jacket and listened.  Minutes later, I heard a crash behind me.  I swung around to my left and got my gun ready.  A doe jumped out of the thick, swampy grass.  It was the fawn! She was small and let's be honest, adorable! I froze where I was and watched her without moving my body, just slowing turning my head.  She was maybe 20 feet from my stand. She walked at me and was totally unaware that I was there.  She walked in front of my stand, maybe 10 feet away at this point, and lifted her head to smell the air.  If she smelt me, she never let on because she started walking towards the ladder of my stand.  I didn't move.  I heard crunching behind me and assumed that it was her mom.  I heard more crunching to my left and wondered if it was the deer that Dad had jumped that circled back.  Maybe it was a buck.  I knew that I couldn't move and alarm them.

The fawn turned away from me and jumped once into some young tree growth.  I couldn't hear or see the mom so I continued to not move. The fawn walked between the new growth and a patch of hardwoods, without a worry at all.  She finally disappeared into the woods in the same spot as the deer earlier in the morning.  Now, where was the mom? I waited a few more minutes and never heard anything.  I slowly turned my head and then my body.  There was no deer there. Hmmm.

Pretty soon, I saw Dad walking through the trees.  I had been in the stand for a little over an hour and didn't want to leave.  There was too many action happening.  Dad said that he had jumped a couple of deer but that they had run directly away from him when he was hoping that they would head my way. I told him that I wanted to sit a little longer and would walk about in 30 minutes.  Twenty minutes later, Hubby appeared and said he would make another swing in the direction that the does had run. I knew then that there were no deer nearby.  We were probably pushing them down towards the Sky Condo.  When Hubby was out of sight, I climbed down and headed for the roadway to meet back up with him and Dad.

I may not have seen a shootable deer, but I love that fawn and watching her explore the woods.  From the playful photos of her at the Sky Condo with her new spots to slowly being more independent and not staying as close to mom as she once did, it is wonderful to watch a deer grow.  This is what anti-hunters just don't understand.  I could have shot her (or her mom) as soon as I saw them.  But, I would much rather watch them grow and continue to keep the deer herb that we have healthy and growing because there is nothing cooler than being that close to a deer when they don't know that you are there.

Now... it's the last weekend.  Let's hope one of those big bucks crossed our path!