Hubby was hunting with his Dad so it was Dad and I to tackle the woods and we got up early and headed out.  I started in T3 and Dad took to the Sky Condo.  It was cold.  It was windy.  I could have had a deer walk up on me and I don't know if I would have heard it.  We did our best so sit it out, but at 9:30, I headed up to get Dad.   As I did, I ran into the neighbor who was driving out of his hunting camp.  After a few comments, they said that they had shot a nice 9 pointer earlier.  My nine pointer! I had weighted in at 170lbs and they had taken him in the same area as T3. Crap!  I congratulated them and trudged to the Sky Condo.

We headed in for an early lunch and to warm up.  Then, we mixed things up.  We headed over to the mountain and I sat near the truck while Dad walked a small ridge to see if he could jump something towards me.  He said that I could sit in the truck but I refused: I could be cold too, plus if a deer did come, I needed to be outside.  I found a large boulder and perched myself up there.

I shot my first deer on this property but it has changed a lot with Dad cutting it so I sat and listened to the wind whip my orange vest.  The birds and squirrels had taken shelter somewhere else but it was a great spot and if it wasn't so far into the woods, it would be great to have a treeseat there.

My thoughts were broken up by a commotion on the ridge to my left.  A doe was running down the hill.  I lifted my gun and situated it between a couple of trees that were in front of me. The doe stopped on the backside of a knoll on the edge of the dirt road.  If she would just take one more step into the road, I could drop her right there.  I could see the top of her back and ears. She went from standing completely still to full on leaping across the road and running around the end of the chopping.  I could just see her tail as she disappeared into the trees. At least I saw a deer!  Dad was happy to.  It meant that deer were at least in the area.

Even though it was still windy, we decided to head back to the Sky Condo for the evening sit.  Dad would sit with me, which was fun and something I don't think we have done since Hubby started hunting with us.  The wind died down a little and I could hear something off to my right.

At first, I thought it was a coyote because it seems big and dark but then, I knew it was something even worst.  A damn turkey.  We had gone months without seeing them or even signs of them but here they were... nine of them walked from the old snowmobile trail, down through the woods and into the field by the Sky Condo.  The whole time we could hear chirping, clucking and an occasional gobble. The first five were either toms or jakes. 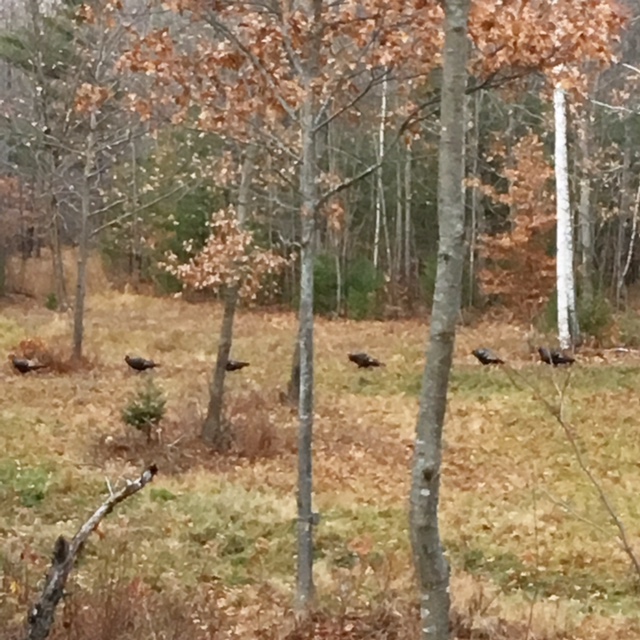 Annoyed, I sat there and waited for the light to fade and the day to end.

We heard some snapping coming from where the turkeys went into the woods. I couldnt see anything but Dad leaned towards me and whispered little one. The fawn! We have watched this fawn and doe all summer on the trail camera.

Dad and I sat motionless as the fawn came out of the woods and walked in front of the Sky Condo. She paused, smelled the air then turned and walked right down the road next to us.  If she had looked up, she could have seem my entire side profile.  She continued to sniff the air when we heard and then saw the doe come to the edge of the woodline and pause.  I had said from the very beginning that I would not shoot that doe because she had the fawn with her and we need breeders on the property.

Seeing her mom there, the fawn jumped back to her and started nursing! yes, nursing! We couldn't imagine that the doe would allow the fawn to nurse as opposed to weening her off but we watched them for a few minutes before the doe walked off into the field.  There was no buck following the doe so we made the assumption that does who are nursing won't go into estrus or go very late.  If any of you have any ideas about this, please leave a comment!

The doe and fawn ate some grass and then headed back into the woods on the same trail that the turkeys has used 45 minutes before.  It was dark enough now that we could not see them once they passed through a second shooting lane and we did not want to jump them if they circled back to the grass, so we got down from the Sky Condo and headed for home.

We didn't bring any meat out with us but watching the turkeys and the deer were pretty exciting!