One year later: what happened to the cubs? 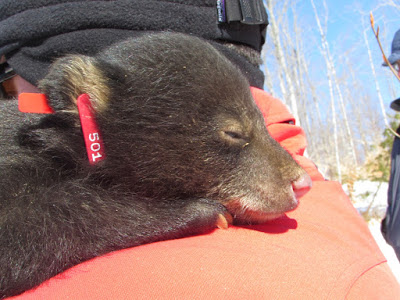 Remember this guy?  I was fortunate enough to meet him last March when he was a brand new black bear.

I knew that our awesome bear biologist were out checking dens and sent a message to one of them asking if they had gone to King's den yet and if the cubs were there with her.  My timing could not have been more perfect; they were heading to her den the next day!

Using the same technology as they did the year before, they found King under a network of cedar blowdowns.  She weighed in at 156lbs - four pounds heavier than she was the year before, and looked totally healthy.

Last year, King had given birth to a male and female cub.  Only the male cub was in the den with her this year. While the female cub could have denned up near by, odds are that it died from an illness, maybe it got hit by a vehicle, another bear could have killed it... there is no way to know. The male cub broke (to date) the 2016 yearling weight scale by coming in at 67 pounds!   The average cub weight so far this year is 35 pounds.  This bear went from 5 1/2 pounds last March to 67 pounds  and that is after being in his den since October/November!  He is huge!

He was given an orange ear tag to mark which area of Maine he is in and put back into the den with King.  This spring when they come out of the den, she will send him out on his own as she looks to breed with another male.


There is no question in my mind that bear biologists have one of the coolest jobs in Maine.  They are able to watch as generations of bears are produced, grow and take to the Maine woods.  As an outdoors woman, hunter and Mainer, I look up to these people and admire their passion and dedication to ensure that we continue to have a healthy bear population across the state.