It's a tradition: fishing GLS on April 1

May 05, 2016
The above average temps and lack of snow this winter had resulted in the fishing season kicking off two weeks ahead of schedule so Robin and I scoped out the stream the day before we were set to go fishing to see how high the water was and how many fellow fishermen were there. We went back to her house where Taylor joined us and got our fly rods ready with leaders and new flies.

The next morning, the three of us ate a delicious breakfast (duck eggs and bear sausage!) and headed to the stream.  Our second year being in the stream on April 1.  I looked like I knew what I was doing which was a vast improvement from last year.  It was also 30 degrees warmer that it had been so the extra layers were not needed. 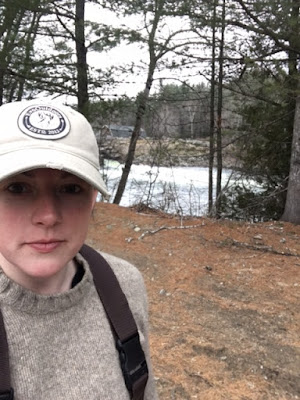 We had an idea of where we wanted to be and made our way across the dam.  Being outdoor bloggers, we needed to get a picture of us (my idea, not Robin's).  I asked the one person out of the water, a guy who clearly knew what he was doing, to take our picture.  We chatted a little about if the fish were biting and what fly he was using.  Soon, he opened his fly box and took out three Golden Retriever flies that he had tied and handed them to us.

Greg told us that he ties the flies for the GLS store and was in the stream the first day it was open and had caught lots of fish. We were excited.  He also advised us to grab our sunglasses, if we had them, to help with the glare off the water even though it was cloudy.  Taylor and I jumped at the suggestion. We thanked Greg for talking with us, taking our photos and the pointers that he shared and headed to the opposite bank.
The three of us waded our way into the stream but after a couple of casts, I got out and moved to the other side.  It was a little shallower and from watching the fishermen the day before, I could get out further into the water if I came in from the other side.
The water was cold but things were not freezing up like they had the year before.  The rain was holding off and there were relativity few people in the stream with Robin, Taylor and I being the only women there; a bragging right Robin and I can claim for the past two years. 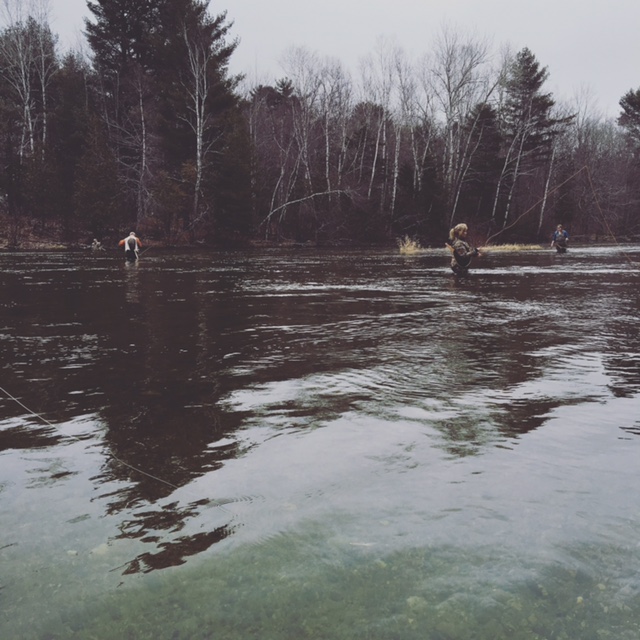 I waded into the water and got set up.  Greg was nearby and every time I would look over at him, he was taking a fish off of his line and throwing it back into the water.  I, on the other hand, was happy to be able to cast and change flies in the water without losing my gear. Greg came over to me and offered to have me take his ‘spot’ in the water and pointed to a group of fish that we could see thanks to the sunglasses.  All I had to do was get my fly to land in front of those fish and let it sink.  He made it sound and look very easy. He also took my fly rod and cast it out a few times to get the line where it needed to be.  He then moved on to help Taylor and Robin.
He had no idea who we were but there he was, waist deep in the stream, helping three women work on their casting and becoming better fly fishermen. It was fantastic and while we might not have thanked him enough, we appreciated all of the advice that he was willing to offer. We need more people like him in the outdoors! We were in the stream for a couple of hours before our friend Tammy joined us and fished the upper side of the dam. Ten minutes after we got out of the water, the siren went off on the dam and the water level in the stream rose and sped up.
It had been a wonderful morning on the water and while we didnt catch a fish or even have a bite, we were waist deep in the water and casting like we knew what we were doing. We happily packed up our fishing gear and headed to the store for lunch.

Every outdoorswoman should be lucky enough to have a group of women like this to explore the outdoors with! It's what makes us better, more confident and ready for a challenge.  This won't be our last fishing trip of 2016 but it was a great way to kick off the season.