June 12, 2017
It is one of my favorite times of year – time to put out the trail cameras. I realize that some people leave them up year round but for us, July is usually when we pack up the cameras, limb clippers and head out into the woods to get some predictors about the upcoming season.


Only hunters understand the excitement that comes from pulling those first memory cards and finding out how many deer are around and which bucks made it through the winter. Of course, with this comes to need to deal with ticks and for me, how many bottles of deet I need to spray myself down with before I feel adequately protected.

We have our usual spots where we will stick a camera or two but over the past few years and as our collection (or addiction) of trail cameras grows, we are finding new spots to hide a camera. This has led us to seeing all kinds of interesting things; a random dog, a nearby property owner passing through, folks on a four-wheeler, a fisher and a few coyotes. The best are those photos with does and fawns and bucks with decent velvet growth. 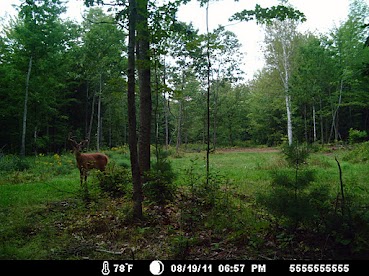 It’s nice to start seeing the deer that you have come to ‘know’ over the years. We have a doe that I think has only one working eye. I say this because in all of the night photos with her, only her right eye reflects and it doesn’t matter which camera catches her for the photo. She has been a regular deer on the property for almost four years now. Hopefully, we will see her again.

There is always some breath holding until those bucks start showing up. I anxiously await to see the first buds or some nice antler growth early on but I usually end up getting mad and having about thirty turkeys taking up all of my memory card. Dad usually reminds me that it doesn’t matter what we see this early, especially for deer because we all know that the fall/rut/hunters will move the bucks around and as was the case with the 10 pointer that I shot, we had no idea that he was around our stands until I dropped him in the snow the day after Thanksgiving.

We still have plenty of time left this summer before we make the full switch into deer hunting mode, but being able to see great trail camera photos makes that transition to fall a little easier.