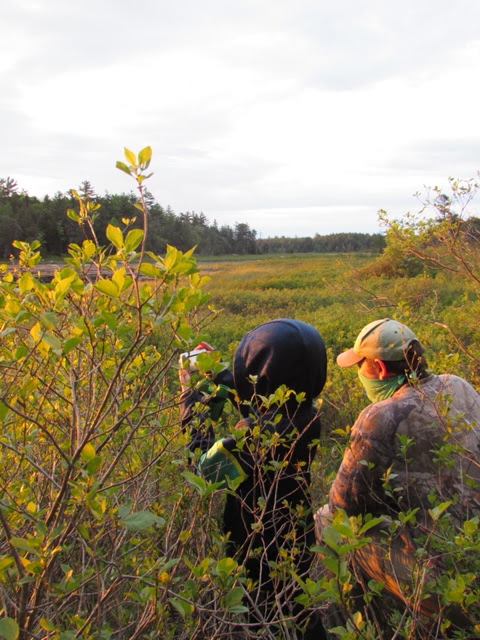 I woke my son up at 1:40 in the morning so that we could be in Millinocket by 4 AM. I have made it a point this year to take advantage of local Maine guides who are struggling because of the cancellations from out-of-state hunters and anglers. Many guides and outfitters have great discounts on trips and as a local, I am happy to take advantage! We had been in quarantine for 12 weeks at that point and it was leading up to my son’s birthday. So at 4am, we met up with Paul Sannicandro of Moose Woods Guide Service to go on a moose safari.

The weather called for rain but we were determined to find a few moose before the storms rolled in.  With bug spray, binoculars, cameras and face masks, we headed out on the Golden Road to find some moose.  We didn’t have to go far before Paul spotted a young bull. Excitedly and quietly, we hiked close to the edge of the pond to get a better view.  The sun was just starting to crest the trees and illuminate the snow on the peak of Katahdin. It was one of those moments that makes you take a deep breath and just be grateful - even amid the swarm of mosquitos.

Paul helped my son snap a few pictures with his camera and let him try out his moose call.  When the bull didn’t respond, Paul assured him that it was because the moose couldn’t hear him.  We watched the bull eat and wade through the water.  My son asked a lot of questions and talked about the outdoors, things he learned from Wild Kratts and how he had perfected his moose call. Paul was fantastic and made sure to keep the conversation going with a very talkative (almost) seven-year-old. He commented on and appreciated his love of the outdoors and willingness to get up in the middle of the night to come and look for moose. 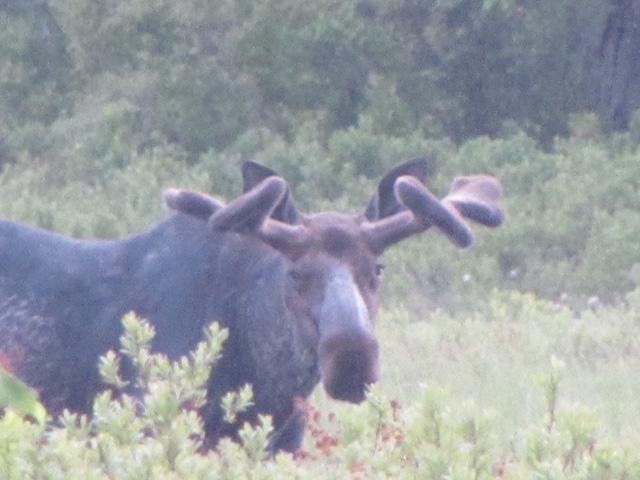 We went to two different ponds and each time there was a larger bull moose that was closer to where we were.  My son snapped more photos. We were able to get some great pictures and watch an amazing sunrise. We were the only people on the road.  We saw waterfalls, parts of the Appalachian trail, signs for Baxter State Park and were able to talk about hunting and fishing and the importance of people seeing these natural places.

The rain began to move in mid-morning and we decided to end our adventure a little early. After being up for almost nine hours, a nap was in store.  As we said our goodbyes, Paul handed my son a biography of Theodore Roosevelt, wished him a happy birthday and told him to keep exploring the wild places.

We need more guys like Paul. We need to support and promote the work that they do and continue to nurture the love of the outdoors in the next generation. It was a fantastic trip filled with great stories, bull moose and a breathtaking landscape.  We can not wait to go back.