Snow and deer hunting: like peanut butter and jelly

December 04, 2020
I am a sucker for the snow.  If there is a snow storm coming or even the threat of a snow squall, I am in the woods. Two years ago, I stood in a snow storm Dad shot a nice 8 pointer and later that season, I shot my own buck in such a heavy snow squall that we couldn't initially find the buck minutes after I shot him because his tracks were covered in snow.
On Wednesday morning, the snow was predicted to arrive between 9am-1pm.  I was not moving from my stand.  Something would be coming out to eat before the storm.  I just had a feeling.
The world was quiet when I settled into the Sky Condo. I heard a snap off to my left and while my initial thought was deer, there were no additional steps. As the sky lightened, I heard something walking towards me on my right side.  It had to be a deer. It was still dark enough in the woods to not have 100% visibility. But, I saw a body. It's either a buck or the lone doe I thought.  Both would be potential shooters. Then, a second body and my mind flashed back to the doe and fawn I had seen earlier in the season. I could shoot the larger doe and the fawn would be fine.
They were walking towards the field.  But stopped short when they got closer to me. They were between shooting lanes and lined up in such a way that I could not see them. I could hear one of them stomping. Something was not right and they were on alert.  I watched one cross the shooting lane and I placed my gun in front of me and waited for one to step out from the woods.  I would take the larger one.  As I looked through the scope, something caught my eye - a third deer! It was making a b-line for the two other deer.  It was quartering to me, leaving me no shot.
The first snow flake fell.
I kept my head down and looked back through the scope.  The next shot I had, I would take it.  I was not going to wait for a large buck. A doe popped out of the treeline and walked towards me. She was cautious and didn't like the situation.  She jumped a few times and ran back in to the wood.  But she never blew and never lifted her tail. I couldn't see her or the other two deer.
Then, a big doe walked out.  I slid my safety off and squeezed the trigger.  I saw the flash of fire and smoke as well as her hunch up, half hop and half stagger-run about sixty feet into the woods.  Then it was quiet.
My heart was pounding.  I fumbled with my vest as I tried to get my phone out.  Doe was all I wrote to Dad.
I was relieved that my season was over. I climbed down and placed my bag under the stand.  The snow was beginning to fall more steadily.  I was proud of my ability to shoot a nice doe.  She had a long nose, thick body and would fill my freezer for the winter.
Dad met up with me and walked with me to where I had last seen the deer. I was telling him about everything that had happened. The doe was laying in the trail. Even on the ground, she was a big doe. I stopped mid sentence as I got closer and my heart sank. I had not shot a doe. It was a spikehorn. Urgh! 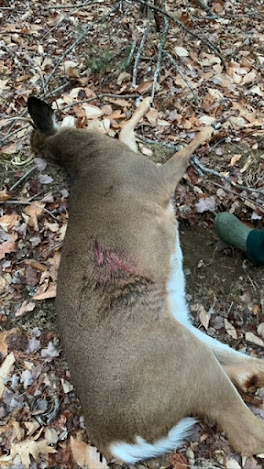 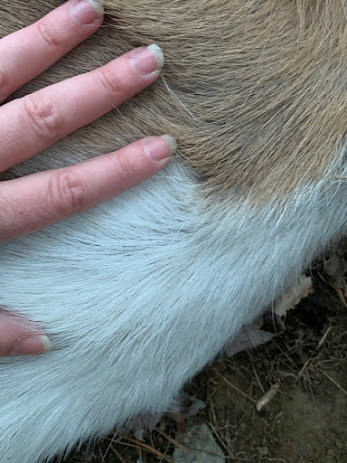 My excitement faded but my gratitude did not.  It was not my preferred choice but I had done it. I made the choice to squeeze the trigger.  We would still eat well and the freezer would be full.  I was grateful for the opportunity.  I had spent close to 65 hours in the woods waiting for the right opportunity to take a deer.  I saw a coyote, doe and fawn, a spikehorn, white flags and a thousand turkeys. 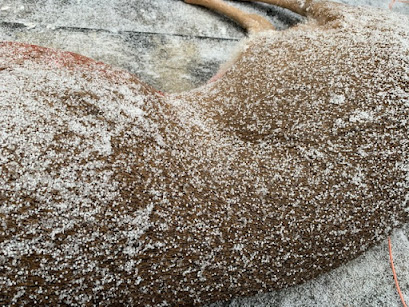 I watched the snow build up on the deer and wished I could spend more time in the woods.  Being in the woods is wonderful in and of itself, but add the falling snow and it's magical.  Until next season...